Heart Attack - My Story - Wimpy As It Is

It will be seven years next month since I had my heart attack.

Let me start by saying that I was First Aid/CPR certified at my work for years and I have helped with three heart attacks (lost one, but later on in the hospital combined with other maladies) and I know the biggest killer of heart attacks is denial.

Back in ‘04 I had an appointment to see a doctor about having my gall bladder removed, but we had to go to K-mart first to pick up a couple of swimsuits for the grandkids. We were going out on the boat for the day after the appointment, but they forgot their trunks.

Anyheartattack, I started having mild chest pains and a little more sever pain in my left arm. Kinda nauseated, too. I told Judy that I was having some pain, but since we were going to the doctor anyway, I would ask them later. Duh! Denial!

The pain was getting worse when we walked into the doctors office. I went to the window to check in and told the lady that I probably need to see the doctor soon because of the symptoms. She took me right in, the doctor came in and, without checking anything, said I was having a heart attack and he was calling an ambulance. I wouldn’t let him as we were ACROSS the street from the hospital. So Judy drove me over.

The ER took me right in and I felt like a sugar cube on an ant hill with all the people working on me. I had a 90% blockage in one of the arteries, but with the blood thinners and other drugs, I was made stable until a surgical room and team were made available at another hospital in Atlanta (we were in Marietta - 30 miles northwest of the ATL). So I had to spend the night there.

I experienced the whole TV scenes of riding down the hall on a gurney watching the ceiling lights pass by, the nurses and orderlies talking and assuring me it wasn’t time to meet my maker (never thought it was, by the way) and the joy of riding in an ambulance with the EMT yapping the whole time. I asked him to cool it, but he said he had to talk and ask questions to keep me awake and not die on him. I told him I was not going to fucking die and to shut up. He laughed…said he hears that all the time…even from the ones who did die. Asshole!

I remember being wheeled into the surgical room, and was disappointed that the room was so small and there weren’t twenty people gathered around and trays of instruments and one of those ‘shocking the shit out of you‘ machines standing by. 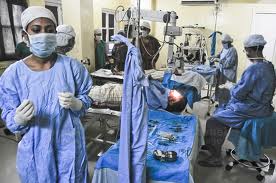 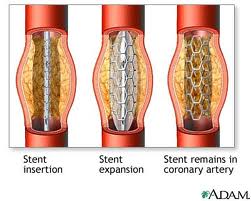 I was told to count backward from ten.

I said ‘Ten’ and was out. I have always been an easy druggie.

They went in through the groan area and I remember, in that twilight phase just before waking up, dreaming that he put a hot brick on my incision (I knew in my dream that I was having surgery) and leaned on it with his whole weight.  It hurt like hell.

Now I’m not a wimp when it comes to pain.  I had my right hand crushed in an industrial accident; had surgery, pins, cast, the whole nine yards and never felt uncomfortable.  But this hurt like a bitch and I remember saying so in my dream.  The nurse who was watching over me in recover said I was very vocal.  I didn’t know it (because I was out cold, yah know) and was embarrassed about it.  She just laughed and said she had seen much worse.

I was very sore for a couple of days, but nothing debilitating.  I was amazed at how small the incision was compared to the pain I felt.  I may have to have another one in the future, too.  I have another artery that is trying to clog up, but he thinks the drugs I take, plus the aspirin regiment, will slow it down.

I have been through three nuclear stress test and pass them all (i.e. I lived through them.  If  you have ever had one, you know it is hell.)…I was scheduled for one a couple of months ago.  But when I went in she told me my co-pay would be $690.

I’m 66 years old and in the ‘too old to have a procedure’ under the Obama Health Care plan.  So next time, instead of surgery, I will just be told to bend over real low and kiss my ass goodbye.

Just though you would like to know…in case I don’t show up for a few days.
Posted by Coffeypot at 11:18 AM

Just thought I'd share that my word verification is rexam btw

Ummmm, Dad, Judy did not drive you over. She tried but you got out at the stop sign and friggen WALKED INTO THE ER. Dumbass... you coulda dropped on the pavement.

But I'm glad you are ok now.

Glad you are ok now!

GOOD INFO. I've only had to do CPR a dozen or more times. In the early days, we didn't have 911, so citizens had to look in the phone book for the PD/FD number...but before they called us, they had to call others to figure out what was wrong with grandpa.

Often, by the time we arrived, the person was really dead

A few years ago my dad had to have 6 bypasses. He has more blockage now but can't have any more surgery.

I'm glad you got to the hospital in time and are doing well now. That's a very high co-pay!

Glad you made it.

Never know who's touching what when you get roofied.

never have liked those effing nuclear cocktail drink / stress tests:P
ive had 2 ablations and have felt the shocker machine on me the first time..
both surgeries hurt like a $@#$$#@

and yet my extra pathways grew back.and yet still have problems with my wolff parkisons white
so the 3rd time will be pace maker.. thanks to having no health insurance... i deal with it.
but im a stubborn ole gal ^_____^

Glad to know that you are still being a great Swab-bee and am really looking forward to having you around for a llllllooooonnnnng time.

Miss Em
{humming 'you've got to have Heart'}

So glad you are ok! Wow that copay is very high!

Well then, I'm glad you're still here John. Denial is and probably always will be the biggest killer. But now that your much wiser, if it happens again, you know what to do.

Dang. I don't ever want to go through that. And I know this is off topic - but I think it's HILARIOUS that your kid totally threw you under the bus (in the comments!). I do the same shit to my dad, so don't feel bad! HAHAHAHA!

Thank God you made it. I hope you are taking good care of yourself.

Smack that kid of yours for correcting you on your own blog!

Well, daaamm. What an ordeal!
Take your meds..I agree with the doc. They help a lot... you'll still be telling jokes and bloggin when your 99. :D

I wasn't trying to be ugly!

He was just so stubborn that he didn't want Judy to drive him. He thought he would be OK to walk in. The docs even got on to him!

I'm guessing you watch what you eat pretty carefully these days? Does waffle house serve spinach salad?
Take care John, your Grandkids need you and those dogs aren't gonna drive themselves all over the place.

Denial, denial, denial... I love it. We should get jobs at the VA! Hahahaha.... little sick humor, there. But the drugs were good, no? I will excerpt / link for my own followup story.

Don't worry what others think.

You just keep ride-din your Dad's Backside because we all want him around for a "luv you looooong time".