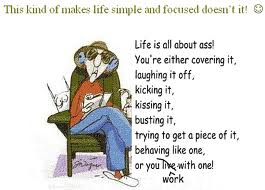 How about starting the weekend with a simle, or maybe even a chuckle. So to tickle your funny bone, I give you these humorous additions:

It was the coldest winter ever. Many animals died because of the cold.

The porcupines, realizing the situation, decided to group together to keep warm.  This way they covered and protected themselves; but the quills of each one wounded their closest companions.

After awhile, they decided to distance themselves one from the other and they began to die, alone and frozen.  So they had to make a choice: either accept the quills of their companions or disappear from the Earth.

Wisely, they decided to go back to being together.  They learned to live with the lit t le wounds caused by the close relationship with their companions in order to receive the heat that came from the others. This way they were able to survive.

The best relationship is not the one that brings together perfect people, but when each individual learns to live with the imperfections of others and can admire the other person’s good qualities.

The moral of the story is: Just learn to live with the Pricks in your life!
*****

A man is stumbling through the woods totally drunk when he comes upon a preacher baptizing people in the river.  It's a hot day and the water looks inviting so the drunk walks into the water and subsequently bumps into the preacher.  The preacher turns around and is almost overcome by the smell of booze.  Whereupon he asks the drunk, 'Are you ready to find Jesus?'

'Yes I am' replies the drunk, so the preacher grabs him and dunks him in the river.  He pulls him up and asks the drunk, 'Brother, have you found Jesus?'

The preacher, shocked at the answer, dunks him into the water again, but for a bit longer this time.  He pulls him out of the water and asks again, 'Have you found Jesus, my brother?'

The drunk again answers breathlessly, 'No, I have not found Jesus.'

By this time the preacher is at his wits end, so he dunks the drunk in the water again.  But this time he holds him down for about 30 seconds.

When the drunk begins kicking his arms and legs, the preacher pulls him up.  The preacher asks the drunk again, 'For the love of God, have you found Jesus?'

The drunk wipes his eyes and catches his breath and says to the preacher,

Replacement Costs...A man wakes up in the hospital, completely bandaged from head to foot.

The doctor comes in and says, "Good, I see you've regained consciousness.  Now, you won't remember this, but you were in a huge pile-up on the freeway.  You're going to be OK, you'll walk again and everything, but I'm very sad to say that your penis was completely severed in the accident and we couldn't find it."

The man groans, but the doctor goes on, "You've got $9000 in insurance compensation coming and we now have the technology to build a new penis.  They work great but they don't come cheap.  It's roughly $1000 an inch."

The man perks up.

"So," the doctor says, "you must decide how many inches you want.  But I understand that you have been married for over thirty years and this is something you should discuss with your wife.  If you had a five incher before and get a nine incher now she might be a bit put out.  However, if you had a nine incher before and you decide to only invest in a five incher, now she might be disappointed.  It's important that she plays a role in helping you make a decision."

The man agrees to talk it over with his wife.  The doctor comes back in the next day.

"So, have you spoken with your wife?"

"And has she helped you make a decision?"

"What is your decision?" asks the doctor.

Bertha was dead.  The minister conducter her eulogy with heartfelt gusto.

Standing before her coffin, the preacher prayed for Bertha.  He thanked The Lord for this very loving woman and said, "Lord, they're finally together."

Ethel leaned over and quietly asked her friend Jane, "Do you think he means her first, second or third husband?"

A Catholic Priest, a Baptist Preacher, and a Rabbi all served as chaplains to the students of Northern Michigan University in Marquette.  They would get together two or three times a week for coffee and to talk shop.

One day, someone made the comment that preaching to people isn't really all that hard - a real challenge would be to preach to a bear.  One thing led to another, and they decided to do an experiment.

They would all go out into the woods, find a bear, preach to it, and attempt to convert it.

Seven days later, they all came together to discuss their experience.

Father Flannery, who had his arm in a sling, was on crutches, and had various bandages on his body and limbs, went first.

'Well,' he said, 'I went into the woods to find me a bear.  And when I found him, I began to read to him from the Catechism.

Well, that bear wanted nothing to do with me and began to slap me around.  So I quickly grabbed my holy water, sprinkled him and, Holy Mary Mother of God, he became as gentle as a lamb.  The Bishop is coming out next week to give him first communion and confirmation.'

Reverend Billy Bob spoke next.  He was in a wheelchair, had one arm and both legs in casts, and had an IV drip.  In his best fire-and-brimstone oratory, he claimed, 'WELL, brothers, you KNOW that we don't sprinkle!  I went out and I FOUND me a bear.  And then I began to read to my bear from God's HOLY WORD!  But that bear wanted nothing to do with me.  So I took HOLD of him and we began to wrestle.  We wrestled down one hill, UP another and DOWN another until we came to a creek.

So I quickly DUNKED him and BAPTIZED his hairy soul.  And just like you said, he became as gentle as a lamb.  We spent the rest of the day praising Jesus. Hallelujah!

The priest and the reverend both looked down at the Rabbi, who was lying in a hospital bed.  He was in a body cast and traction with IVs and monitors running in and out of him.

He was in really bad shape.

The Sierra Club and the U.S. Forest Service were presenting an alternative to the Montana ranchers for controlling the coyote population.  It seems that after years of the ranchers using the tried and true method of shooting or trapping the predators, the Sierra Club had a "more humane" solution to this issue.

What they were proposing was for the animals to be captured alive.  The males would then be castrated and let loose again.

This was ACTUALLY proposed by the Sierra Club and by the U.S. Forest Service.

All of the ranchers thought about this amazing idea for a couple of minutes.  Finally an old fellow wearing a big cowboy hat in the back of the conference room stood up, tipped his hat back and said;

Hope these made you smile - regardless of the weather or your rotten kids.

Posted by Coffeypot at 2:23 PM

Thanks for the laughs - favorite has to be granite countertops (since mine were just installed today!):)

Funny! I like the porcupine one. My husband always says I am prickly like a porcupine. I just told him it is wise he stays with me because the alternative is death:)

good ones. I just might have to swipe these.

Poor Bertha. She must have been Catholic :)

These are great! I read them to my husband. My favorite is baptizing the drunk.

Can't decide between baptizing the drunk or Bertha's legs finally being together....loved the chuckles. Almost woke up lil Duck.

Thanks for a great cap to my Friday!

I'm agreeing with the cartoon. On this particular day, I'm mostly agreeing with the "working with an ass" part!
I also looked at the laughing baby video! So funny! But I'm like, "My kids laughed like that too when they were babies! Why didn't I think to video tape and Youtube it!"
Have a great weekend John! Thanks for the laugh!

HA HA!!! chuckling over my coffee on Sat morning... having just had a convo with hubs about our counter tops I'm off to snip his breaks.. bbwwaaahahahahahaaa

HEHEE!... you have the best funnies :D
I like the coyote one.