Visit A Pal and A Fathers Birthday Gift 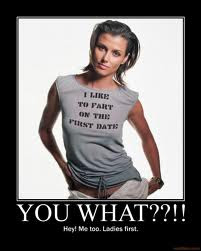 I was visiting one of my favorite reads yesterday, the lovely Minute Mans Wife and I was laughing at her post on the most inappropriate times for women to fart.  Oh yes you do, ladies.  I’ve heard you.  Just last night I heard Judy in the bathroom let one rip. It sounded like a huge male bullfrog bellowing it’s mating call.  It was awesome…but don’t tell her I told you.  She is shy about stuff like that.

On the other hand, if you ladies wanna know when it’s best not to fart, give her a read.  Drop on over and give her some love.  She’s been kinda down lately and could use some virtual hugs…and your opinions on women farting.

Her post remained me of one of my favorite jokes. 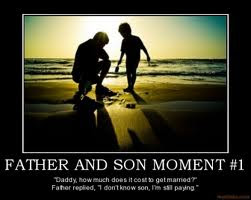 This good ole boy’s son had just turned sixteen years old and for his birthday present he took him across the tracks to the whorehouse. He figured it was time his son became a man.

So they walked into the house and met the madam. The daddy told her, “I give you a boy, give me back a man.”

The madam, having had this happen quiet often, knew what to do. She called Ethel and told her to be gentle with the boy.

He told her he didn’t know and ask what she advised.  She said, “Sweetie, I am good at anything you desire.  So choose one.  I recommend Missionary, Doggie, 69...”

The boy interrupted, “69! That sounds interesting. Give me some of that, please.”

So they get in the required positions and start to work on each other.  All of a sudden, the lady farted.  She paused and said, “Excuse me.”  But the boy kept on doing his thang.  So she went back to her bidness.

Suddenly she farted again, and again she stopped and said, “Excuse me again, honey.”  Though the boy said nothing, but he did slow down a little, so she asked him if he was okay.

The boy looked down at her and said, “Ma’am, what you are doing to me down there is the best feelings I had in my life. Simply wonderful! And I wouldn’t wont to hurt your feelings for anything in this world, but I can’t take 67 more of those.”
Posted by Coffeypot at 12:31 PM

At least Dad can take pride in the boy's arithmetic.

Fart? First of all women don't fart. I guess there is not second part. :)

I DO NOT FART.