Yep! They Said It! 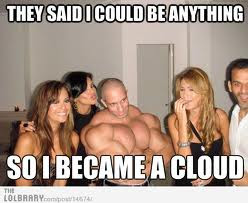 Having more money doesn’t make you happier.  I have 50 million dollars but I’m just as happy as when I had 48 million. – Arnold Schwarzenegger

We are here on earth to do good into others.  What the others are here for, I have no idea. – WH Auden

In hotel rooms I worry.  I can’t be the only guy who sits on the furniture naked. – Jonathan Katz

If life were fair Elvis would still be alive today and all the impersonators would be dead. – Johnny Carson

I don’t believe in astrology.  I am a Sagittarius and we’re very skeptic. – Arthur C Clarke

Hollywood must be the only place on earth where you can be fired by a man wearing a Hawaiian shirt and a baseball cap. – Steve Martin

Home cooking.  Where many a man thinks his wife is. – Jimmy Durante

As I hurtled through space, one thought kept crossing my mind – ever part of this rocket was supplied by the lowest bidder. – John Glenn

If toast always lands butter-side down, and cats always land on their feet, what happens if you strap toast on the back of a cat? – Steven Wright

America is so advanced that even the chairs are electric. – Doug Hamwell

The first piece of luggage on the carousel never belongs to anyone. – George Roberts

If God had intended us to fly he would have made it easier to get to the airport. – Jonathan Winters

I have kleptomania, but when it gets bad, I take something for it. – Robert Benchley

America is the only country where a significant proportion of the population believes that professional wrestling is real but the moon landing was faked. – David Letterman

After the game, the King and the pawn go into the same box. – Italian proverb.

Men are like linoleum floors.  Lay’em right and you can walk all over them for thirty years. – Betsy Salkind

The only reason they say ‘Women and children first’ is to test the strength of the lifeboats. – Jean Kerr

I’ve been married to a communist and a fascist, and neither would take out the garbage. – Zsa Zsa Gabor

You know you’re a redneck if your home has wheels and your car doesn’t. – Jeff Foxworthy

When a man opens a car door for his wife, it’s either a new car or a new wife. – Prince Philip

Computer once beat me at chess, but is was no match for me at kickboxing. – Emo Philips

Wood burns faster when you have to cut and chop it yourself. – Harrison Ford

The best cure for sea sickness is to sit under a tree. – Spike Milligan

Now, Peeps.  Do you have anything to say worth adding to the list?

Posted by Coffeypot at 4:51 PM

I don't have anything to say that's worthwhile; that's why I blog.

And the dude in the picture...is not so great. He's kindahgross. That is a word.

Oh my gosh, these are hilarious! Thanks for the laugh!