From The Highest High To The Lowest Low In Three Hours

The reunion was a blast… to start with.  The association reunion started off with a pub crawl in old Virginia Beach right under the bow of the USS Wisconsin BB-64 (which we toured on Thursday as part of an excursion) on Wednesday night.

And Thursday night I had the best surprise.  I had just sat down at the dinner table in the ballroom when I saw Judy standing there with a grin on her face.  She nodded over to the other side of the table and there was my daughter, Marni and son-in-law, Carl, walking up.

I have wanted her to attend one of the reunions for years, and meet some of the guys and see what it was like and listen to the stories.  But it just couldn’t be worked out.  Back in March Judy and my old Navy buddy, Earl, got together and made it possible for them to attend… and they kept it a secret all these months… even the grandkids. It was a surprise birthday present for me, and to say I was happy and surprised would be a sad understatement.

We had for dinner, SOS, which for you landlubbers is Shit On A Shingle.  Actually it is supposed to be Cream Chip Beef on Toast, a regular Navy breakfast delicacy.  But the chef must have been Army, because it was more like sausage grave on bread.  It was bad… but I ate all of mine.  No one else at the table was able to get it down.  Pussies!

But we laughed and joked about it the whole meal.  It was a fun time.

After the dinner and the entertainment (a barbershop quartet singing old songs) and I woke up, we migrated to the bar for a drink or two or twenty and that is when the bottom fell out for me and the family.

My cell started ringing and I couldn’t figure who would be calling me at that hour.  It was the Cobb County Police informing me that my younger brother Stephen had died. 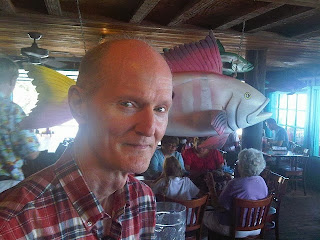 (This is the only picture I have of him on this computer. I have several on the other computer that I cannot get into because I had it fucking fixed and lost all kinds of shit. Dammit!)

He had been dead for days.  The last time I had talked to him was Sunday when he was planning on taking me out for dinner for my birthday, which was Friday.  He had a couple of friends talk to him on Sunday also.  But no one had talked to him during the week.

He apparently died of a heart attack.  He was suffering from Parkinson’s and was not in the best of health.  He was fighting it as hard as he could, but the doctor told him last month that he had about two years to live.  Regardless, he was strong in spirit.  He was not going down easily.

Stephen was also gentle, funny and caring.  He worried about his friends and me.  He laughed and joked often and was really the funniest one in the family.  Now I am.  I’m all that’s left.

I think it was meant to be that Marni was there with me and Judy.  She truly loved her Uncle Steve.  It was good that we were together and was able to support one another.  And Peeps, I have always said that if was was in trouble and in need, I had rather have a bunch of sailors around me than any other force.  We are tight and they (and their wives) were there for us, too.  Thanks, guys!
I know I will suffer later. But right now I am just too busy.  I haven’t had time to come to terms with all this.  I had to stay in VA because I had things to do with the reunion, and realistically there was nothing to do at home.   I did spend my birthday on a tour, but was on the phone with family and friends most of the time.

Judy and I got home Sunday afternoon to a sick dog that had to have doggie meds picked up, and then drove the 100 miles to Steve’s house to try and find insurance policies and stuff.  We spent the night there.  Then we spent today making arrangements for the funeral.  Tell ya what, Peeps.  It cost more to die than it does to live.  It is a crime what they charge to bury someone.  I would go into the business… if I didn’t have to deal with all those dead people.

Anyway, that is how I went from the highest high (legally) to the lowest low in a matter of three hours.

Plus my driver’s license expired on my birthday - last Friday.  Who checks that shit anyway?  Evidently not me.

But the cop who pulled me over on the way home did.  That's how I found out it had run it's course.  But the cop didn't give me a ticket.  She asked me why I was going 53 in a 35 and I told her I just didn't realize I was going that fast because I was talking to my wife.  She said I can understand that, ran my license and just told me to slow down.   That was a good thing.

So I have to go tomorrow and renew them, too.  Plus I left my truck keys at Stephens house.

GIVE ME A BREAK!

I'm so sorry about your brother Stephen's death. Also sorry about the funeral costs --I think when my mother died, it was over 10k. That included a granite bench. Now that I think about it.... I'm not sure why he thought she needed a bench. Ah well!

Anyway, you take care of yourself. I'll let David know. We'll be thinking of you on Thursday and the weeks after.

sending lots of hugs and prayers to you john

Sorry to hear about your brother.

Sorry for your loss! Be kind to yourself.

You're all in my thoughts and prayers. So sorry for the loss of your brother. May comfort and peace surround you, my friend. xoxoxoxox from the west of Texas.

I won't get cranked up about funerals, burials and the entire crappy experience of dealing with the death of family, while sorting through the legal crap.

Take some time for yourself, even if it's just to sit alone on the back porch and sip a drink for an hour or so. It recharges your batteries.

Hugs to you and your family.

Condolences for your loss.

I hear you, and I'm here for you. Whatever and whenever.


There are always years that need to be lived and love to be shared.

The timing is never acceptable.....

That photo made me cry. As did your post, Uncle. I'll see you tomorrow night.

I'm so sorry, but so glad that Marni surprised you.

Oh Coffey....I am so very sorry. My thoughts and prayers are with you and yours. Big hugs.

I'm glad your daughter was able to join you for the reunion, I'm sorry that your brother passed away. I'm glad that his friends made the effort to get into the house. I remember when my grandfather passed, my dad,aunt and uncle sais that it should be a crime for what the funeral homes wanted to charge.

I am so sorry to hear your brother died. When my brother died, I was so distraught and all alone. I drove to his funeral out of state alone. On the way home I went to a corporate Christmas party because I would just come home to a cold, lonely house.

Ohh. I'm so sorry. Hugs...
Glad your family was all there with you.
Life is so bittersweet...
I still miss my bro so much.

Sorry about your brother but I'm glad you had a wonderful time with shipmates and family. God bless you all.

Thank you all so much for your comments, thoughts and prayers. If this had to be, I was with family and friends when I found out. My Navy family is awesome as was my daughter and her husband and Judy. Even more awesome, one of my Navy buddies stopped by on his way home and just showed up at the funeral. He told Judy, "I had to come. He needs to know he still has brothers." Choked me up. Again, thank you all.

This hurts me too. When my sister dies, I'll be the last and only. I am so glad I got to go home to see her. The thing is, she spent more time making sure I would be okay than I could spend making HER feel okay. I mean, HOW does one DO that??

You said to go. You were right.

I'm glad you have backup. It will be a while before you can look out for yourself.

All my love, John.

Dana, I found out at the funeral yesterday that I am not alone. I was standing outside the church greeting and thanking those who came (a lot) and I felt this tap on my sholder. I turned and there stood one of my Navy buddies. He and his wife were heading back to TX via way of SC and stopped off to attend the funeral. Judy was thanking him and he told her, I had to come. I had to let him know he still has many brothers.

Del was one of the survivors off the front of the ship and had lost 2 brothers before that. He knew how I felt and, God, it made me feel good to see him standing there.

I do have some brothers for other mothers. I don't understand it and wonder why, but they are there.

My brother was suffering from Parkinson's but he worried about everyone else, too. I tend to do that. But I am very glad you went.

I'm so sorry, Coffey. Sending you love and an inappropriate grope. <3

I'm so sorry to hear this Coffey. I'm glad your family was with you when you heard.

God keep you all in His arms.

HAS GOD'S GRACE BEEN OFFERED TO ALL MEN?

According to Calvinists, God has only offered grace to a select few who were individually predetermined for salvation before man was created. Is this what the Scriptures proclaim? No, they do not.

2 Timothy 3:16 All Scripture is given by inspiration of God..(NKJV)
The words of John Calvin are not Scripture.
The words of the apostle Paul are Scripture.(SEE: 2 Peter 3:15-16)

The apostle Paul wrote the letter to Titus. Titus is Scripture. John Calvin did not pen one single verse of Scripture. Calvin's words were not Scripture. If John Calvin's writings were inspired by God, then they should be included in the Bible.

THE BIBLE PROCLAIMS THAT GRACE IS OFFERED TO ALL MANKIND UNDER THE NEW COVENANT TERMS FOR PARDON.

Titus 2:11 For the grace of God that brings salvation has appeared to all men. (NKJV)

Titus 2:11 For the grace of God has appeared that offers salvation to all people. (New International Version)

Titus 2:11 For the grace of God has appeared, bringing salvation for all people. (English Standard Version)

Titus 2:11 For the all saving grace of God has been revealed to all men; (Aramaic Bible in Plain English)

Titus 2:11 For the grace of God that brings salvation hath appeared to all men, (King James Bible)

The free gift of salvation has been offered to all men who will accept God's terms for pardon.


YOU ARE INVITED TO FOLLOW MY CHRISTIAN BLOG> http://steve-finnell.blogspot.com