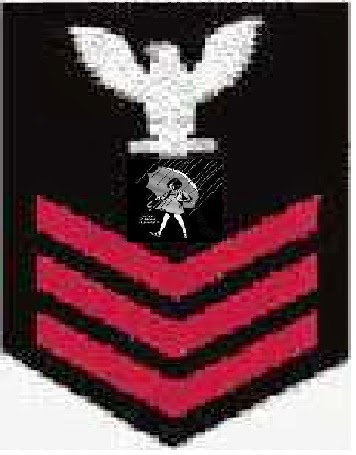 
I discovered a new blog today that I know I will enjoy.  I like his since of humor and it seems to be all Navy stuff.
The new blog is Dan the Navy Man at (http://danthenavyman.blogspot.com/).  Here is one of his posts that brought back some memories…

“More Pranks and Fools Errands”
If you never were enlisted in the good ol’ boy Navy then you missed out on some special times never intended for the likes of sissies and gutless wankers without a backbone. I've somehow managed to reach the ripe tenure of Navy retirement age in this ol’ canoe club without being lynched, keelhauled, dunked from a yard arm, marooned on a beach head, tarred and feathered or sold into slavery for my litany of misdeeds! If you consider some of the sailors and rascals I ran with, that has to make me a one of a kind!

In my glorious youth as a sailor I’ve been witness to a myriad of transgressions that would make most any pirate gaudamn proud in his own right. I haven’t the foggiest notion on where to begin this tale so I’ll start from the forecastle and work my way down to the fantail. Let’s run amuck shall we?

Anyone ever heard of the Mail Buoy Watch? One of the oldest tricks in the book next to the batteries for the sound powered phones…usually plays out with some gullable rookie greenhorn on the forecastle his first underway! Poor fella stands out in the rain and high winds look’n for a buoy so he can retrieve said mail for the crew! Everyone knows how important the mail is underway!!!

Up forward below the forcastle there was a tiny self-governing lil’ place known as the 'bos’n locker'. It was ruled by a senior Deck Ape and inhabited by a raggety-ass group of scoundrels known as deck hands. Its seclusion was insured by its inaccessibility from any other parts of the ship. No one without a bos’n whistle or a chipping hammer ever had a purpose or desire to loiter in such a wretched place. I’m figuring the ‘bos’n locker’ was sacred so long as some sorry land lubber didn’t escape from a well secured tie down of a bos’n knot. Ya didn’t wanna be the victim of a training session while BM1 was giving deckhand training to his gang of scoundrels…..it gives a hole new meaning to being hog tied!!

On the bridge sometimes a senior space cadet seaman might send another to tell the OOD we’ve spotted a few ‘CGU-11s’ (seagulls) on the horizon. Some JOODs will fall for this as well…considering they’re usually butter bar Ensigns who are still wet behind the ears. Another one that might get the ship’s QMC a little heated would be to send someone to the bridge for a PRKY-7 (Prick E-7)! Most will refer the young fella to the QMC who will give him a tongue lashing from hell!! Do you remember that “Double A”?? Yeah, I sent his ass up there…..I knew you were on watch!! He-he!!

I'm sure if you ever came up to CIC you got a glimpse of the ‘DRT snake’!! In some cases it might have been referred to as the ‘DRT Worm.’ He-he… When a new fella would get shown around the ship we had a piece of equipment back in the day called the Dead Reckoning Tracer (DRT). It was essentially a table with a glass top and a hollow interior with a light where the ship’s gyro gave inputs for course and speed changes. A side panel would be opened and the poor sap would bend down and look inside. Mean while our illustrious tour guide would whip out his cobra commander into the open interior and watch as the new fella shrieked in horror while leaping backwards as though it was gonna bite’m! It’s a classic maneuver I believe was taught some place called OS ‘A’ School somewhere in Virginia…

In the berthing compartments ol’ salts can be like cannibals eating their young! Yes, watching these ol’ coots teach us how to trice up racks and stuff young’ns into the laundry bin was always a treat. I remember a few times tricing up a young sailor into his rack and duct taping his sorry ass so he couldn’t get out until someone cut him down. That sorry son-of-a-bitch could be in there for hours. One of my favorites was dousing some poor son-of-a-bitches white sheets with some fine ‘bug juice’ powder! That would be Kool aid to all you land lubbers! When the sorry fella’ starts to sweat in his rack……ooooh it makes funny shapes & designs allover his gaudamn sheets! Talk about a pissed off sailor... with horns!!

Then there are the Mess Deck Follies! This is a great place to send a fella for a bucket of steam. On one particular cruise one of the A-gangers was crank’n and decided to tactically place an unused condom into the vat of vanilla pudding on the serving line. He pushed it down into the bowl so it couldn't be seen. A few scoops later and ‘Presto’!! That son-of-a-bitch caused quite a riot!! Thank Neptunis Rex he never got caught…..but we knew who did it!!

The Engineers on a ship are always ready to have some fun. Send that poor fella’ down to the Central Control Room (CCS) to blow the MPA! That would be Main Propulsion Assistant… usually an LDO or CWO ol’ salt who’s been around a while!!

“So you wanna be funny do ya?” … as he unzips his fly!! “Who sent your ass down here? Tell them they need to come blow the MPA because they’re good at it!”

I’ve even heard where the poor SAP involved was sent down to Engineering with a bag of laundry to ask for the ‘CHENG’ to do his laundry for him…..that would be the Chief Engineer!! Doesn’t usually bode well for the young fella!

What about the flight deck? Never mess with those airdales when they’re trying to take care of the helos! You might just get sent down to supply for some good ol’ prop wash! Or what about 100 ft of flight line? These guys have their own set of pranks to pull….and they’re all good ones!!

The fantail is kinda the back porch of your float’n oasis away from home! It’s here where sailors came off watch to smoke a cigarette and tell a no shitter!! It’s the place where we could relax our guard and talk about that transvestite seaman Johnny was smootch’n with at our last liberty port! This was the place to witness a glorious sunset or watch the rooster tail as the ship was at full flank! It was also a good place for Chief to deliver a good ass chewing….As you can see, not a lot of pranks were pulled on the fantail. This was kind of a sacred place… but it was also funnier than shit to watch some poor fella tripping over the bollards in the dead of night trying to make his way out to the smoke pit!!

The last place you wanted to be pranked on was in the head. The smell of the shitters could do wanders to a young lad prone to sea sickness! Gett’n one of those fellas to stand over the shitter and continuously flush it until the swirls change direction while crossing the equator was a classic.

“Let us know when it changes direction so we can start the ceremonies!!”

This was usually done with one of the squeamish fellas who didn’t want to partake in the ‘WOG DAY’ ceremonies! He would get his… one way or the other! Then of course was the ‘Mad Shitter’!! Nothing worse than walking into the shower at 0500 hours after reveille to be greeted by a hot steamy turd in the shower! Happened all the time on the good ol’ RAINIER!!

Yep, over the years I was probably involved in every knot-head prank and foolish stunt that took place! (But I wasn’t the Mad Shitter) …We were young and dumb but the memories are still a lot of fun! Can you still remember?????

See what I mean.  A cool blog.

Posted by Coffeypot at 5:33 PM

Aw. Kindred spirits you are.

Not another Navy blog...

MSgt B - Go to his site and see all his Navy Peeps. We are our there... and we beat Army!

Secretly hoping there won't be any retired Navy working with me when this newby starts at the Post Office soon... lol

Wrexie - If you do get a Navy guy, your days will not be boring. Us tar's loves our pretty women.