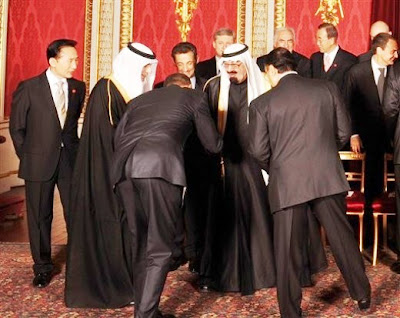 Via Drudge comes Camille Paglia's exasperation with Barack Obama and his churlish retinue:
Obama's staffing problems are blatant—from that bleating boy of a treasury secretary to what appears to be a total vacuum where a chief of protocol should be. There has been one needless gaffe after another—from the president's tacky appearance on a late-night comedy show to the kitsch gifts given to the British prime minister, followed by the sweater-clad first lady's over-familiarity with the queen and culminating in the jaw-dropping spectacle of a president of the United States bowing to the king of Saudi Arabia. Why was protest about the latter indignity confined to conservatives? The silence of the major media was a disgrace. But I attribute that embarrassing incident not to Obama's sinister or naive appeasement of the Muslim world but to a simple if costly breakdown in basic command of protocol.

And from a fellow concerned citized who email this to me:

Observations on the President's Early Days:
1. Offended the Queen of England.
2. Bowed to the King of Saudi Arabia.
3. Praised the Marxist Daniel Ortega.
4. Kissed Hugo Chavez on the cheek.
5. Endorsed the Socialist Evo Morales of Bolivia.
6. Announced we would meet with Iranians with no pre-conditions.
7. Gave away billions to AIG also without pre-conditions.
8. Expanded the bailouts.
9. Insulted everyone who has ever loved a Special Olympian.
10. Doubled our national debt.
11. Announced a termination of the space defense system the day after the North Koreans launched an ICBM.
12. Despite the urgings of his own CIA director and the prior 4 CIA directors, released information on intelligence gathering.
13. Accepted without public comment the fact that five of his cabinet members cheated on their taxes and two others withdrew after they couldn't take the heat.
14. Appointed a Homeland Security Chief who quickly identified as "dangers to the nation", groups including veterans of the military, and opponents to abortion on demand, and who ordered that the word "terrorism" no longer be used but instead referred to such acts as "man made disasters."
15. Circled the globe so he could openly apologize for America 's greatness.
16. Told the Mexican President that the violence in their country was because of us.
17. Politicized the census by moving it into the White House from its Department of Commerce origins.
18. Appointed as Attorney General the man who orchestrated the forced removal and expulsion from America to Cuba of a nine-year old whose mother died trying to bring him to a life of freedom in theUnited States.
19. Salutes as heroes three Navy SEALS who took down three terrorists who threatened one American life and the next day announces members of the Bush administration will likely stand trial for "torturing" a terrorist who had played a part in killing 3000 Americans by pouring water up his nose.
20. Air Force One over New York City.
21. Sent his National Defense Advisor to Europe to assure Europe that the US will no longer treat Israel in a special manner and they might be on their own with the Muslims.
22. Began the process of nationalizing the Auto Industry and the Insurance industry.
23. Announced that for all intents and purposes the Health Insurance Industry will be nationalized.

So...how's this 'Change You Can Count On' working for you now, Comrad?

If anyone can find a President that no one has problems with, please let me know.

Nope! Bush, except for his last two years because of the Do-Nothing Democratic House but badmouth him, he will go down in history as a great President. Obama is on the way to becoming the worst one in history. The President who destroyed America.

Ms. Coffeepot.....you have hit the nail on the head!!!We can only hope that somehow America can survive this Dumbo who had no business getting elected,

Should Bush go down in history as a great president it will require that those who decide it to avoid any critical thinking.

To blame a Democratic House when the Republicans did nothing but undermine the Democrats, is ignorant.

It is far too soon to decide about Obama. No wise person counts his or her chickens before they are hatched.

And teri is quite correct. Obama is already better than Bush.

Arty62, thanks for stopping by and your comments. Why not go ahead and activate your blog and let me join you in bashing the LamaBama.

BD, again you are showing your blind allegiance to anti-American causes. Bush not only will be reported in history as a better President, but he will also be know for his class and refusal to denigrate the Democratic Party - unlike the scumbag we have now.