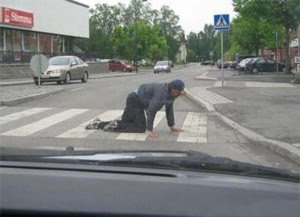 An Irishman’s been drinking at a pub all night. The bartender finally says that the bar is closing. So the Irishman stands up to leave and falls flat on his face. He tries to stand one more time, same result. He figures he’ll crawl outside and get some fresh air and maybe that will sober him up some.

Once outside he stands up and falls flat on his face. So he decides to crawl the 4 blocks to his home. When he arrives at the door he stands up and, again, falls falt. So he crawls through the door and into his bedroom. When he reaches the bed he tries one more time to stand up.

This time he manages to pull himself upright but quickly falls right into bed and was sound asleep as soon as his head hit the pillow. He awakens the next morning to his wife standing over him. She shouts, “So, you’ve been out drinking again!!”

“What makes you say that?” He asks as he puts on an innocent look.

“The pub called. You left your wheelchair there again.”

Posted by Coffeypot at 2:22 AM

Classic... you have to love the Irish!

Red, being German, Irish, Cherokee (GIC American) I do have the love of the beer. And I am lovable, so help yourself. Of the GIC, I am mostly Irish, 1/8 Cherokee and a tad of German, and ALL SOUTHERN.

But you don't get it...anybody else would have given up. Only us Iris are so stubborn that we'd keep going.

Dude, a true Irishman would have just slept in the pub. I have before...stretched out on the bar with a role of paper towels as a pillow. But once the dude (no kin) started crawling, he didn’t give up.

I fell asleep between the seat of an Army jeep, on the bed springs (no mattress) in the British Army barracks, in a Gamma Goat, and a few other places in my younger days.
Now that I'm smarter, I don't have that problem.

Dude, a Gamma Goat looks like a golf cart on steroids.

Heehee...Coffeypot, I came over for a visit and ya made me laugh. :)

I've got just enough Indian blood in me to make me like 'blue bling' and silver...but the German side of me that has had it's share of beer.
We called 'em "brewski's" in the Chicagoland area ...in honor of the Polish, who always supplied us with good joke material. :)

Wrexie, welcome and do you know how to tell which one is the bride at a polish wedding? She's the one with the hair under her arms braided.

Now THAT was funny. And speaking of funny: Two irishmen walk past a bar........hey, it could happen.

Dana, that's not funny. They are probably under arrest and being led to the squad car.