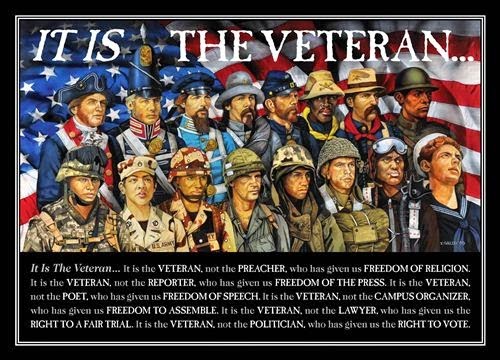 I wrote this and posted it on my blog a couple of years ago and it is kind of long, Peeps, but it has been on my mind again.  So bare with me.

November 11th, what we now call "Veterans Day," was originally called “Armistice Day.”  It celebrated the end of World War I, when the guns fell silent across the Western Front on the 11th Month, 11thday, on the 11th hour of 1918.  It is not a day to celebrate war, but to celebrate peace and thank those who have served.  However, today IS NOT the day to remember those who fought and died for our country.  That day is Memorial Day.  Today is about those of us who just served.  I want to take this opportunity, as a veteran, to remember, and to help those who enjoy this hard-fought peace that a veteran helped provide, to help you to understand.

Those who have served in the military know what it is like to do a job that is extremely difficult and dangerous; no matter if they are in combat, a war zone, or serving peace time.  I know 74 brave young men who were combat veterans who lost their lives just outside the boundary slated as a combat zone of Vietnam.  They fought hard with close-in artillery support for a group of Marines and Army guys, yet were killed in an accidental collision with another ship.  That 50 miles has kept their name off The Wall… to save the Navy from admitting… what?  The Navy didn’t do anything.  Those young sailors did.  And they died for it.

Those who served know that they do more work by 9:00 a.m. than most people do in civilian life all day long.  Yet they have no time clock to punch, just the NCO telling them when to start and when to stop.  There are no unions, shop stewards or scheduled breaks.  No OSHA pimps looking over their shoulders… no need too.  They KNOW their job and how to do it.

They will also have no problem dropping trow and taking a crap in the open with their flanks covered by their “brothers.”  The will hold that same man while he cries over a lost friend.  Or cuss him for snoring too loud, or just because of his last name or any other reason just to relieve boredom.

And they will carry these experiences inside for the rest of their lives.

And those who served know how others perceive them.  Most of us feel it is because they, who did not serve, are ashamed they were not brave enough to have stepped up.  Those types know they are in the presence of America’s Best.

It has always been this way.

Rudyard Kipling, the Poet Laureate of England in the Victorian Days, said it best in a poem, “Tommy”:
“I went into a public-‘ouse to get a pint of beer,
The publican he ups and says “we serve no red coats here.”
The girls be’ind the bar they laughed and giggled fit to die,
I outs into the street again an’ to myself sez I:
· Oh it’s Tommy this and Tommy that, an’ Tommy, go away”
· But it’s “Thank you, Mister Atkins,” when the band begins to play—
“I went into a theatre as sober as could be,
They gave a drunk civilian room, but hadn’t none for me;
They sent me to the gallery or round the music halls,
But when it comes to fightin’, Lord! They’ll shove me in the stalls!
· But it’s Tommy this, an’ Tommy that, an’ “Tommy, wait outside”;
· But it’s “Special train for Atkins” when the troopship’s on the tide.”
Yes, makin’ mock o’uniforms that guard you while you sleep
Is cheaper than them uniforms, an’ they’re starvation cheap;
An’ hustlin’ drunken soldiers when they’re goin’ large a bit
Is five times better business than paradin’ in full kit.
· Then it’s Tommy this, and Tommy that, an “Tommy ow’s your soul?”
· But it “Thin red line of heroes when the drums begin to roll.”
“We aren’t no thin red heroes, nor we aren’t no blackguards too,
But single men in barracks, most remarkable, like you;
An’ if sometimes our conduck isn’t all your fancy paints,
Why, single men in barracks don’t grow into plaster saints;
· While it’s Tommy this and Tommy that, an’ “Tommy, fall be’ind”
· But it’s “Please to walk in front, sir,” when there’s trouble in the wind.
“For it’s Tommy this, an’ Tommy that, an’ “Chuck him out, the brute!”
But it’s “Saviour of his country” when the guns begin to shoot;
An’ it’s Tommy this, an’ Tommy that, an’ Anything you please;
An’ Tommy ain’t a bloomin’ fool—you bet that Tommy sees!"

Yet, you try to thank any veteran and more than likely he/she will tell you, “No need to thank me, I just served.”  Because we did our job every day to ad nauseam, we feel we did nothing special.  Now there are those few, those proud men who faced danger at its worse.  They bear the scars, both visible and unseen, and rightly deserve our thanks.  The rest of us feel kind of funny when thanked for our service, which was, for us, just doing what the country needed and asked of us at the time.

But because we did do our time and did go through the training, did do our jobs and did come home (or stayed and made a career of their service), those guys and gals deserve your thanks…except me.  I didn’t do anything.
Posted by Coffeypot at 12:48 AM

I don't remember this post from the past. It's excellent. I fear that young people today don't comprehend Veterans Day, Memorial Day, and Pearl Harbor Day. They weren't alive during Vietnam, and their parents aren't part of the WW II generation. Veterans Day and Memorial Day have turned into sales events in stores. Pearl Harbor Day is virtually ignored.

Just stopping by to say hi!

I remember when November 11th was Armistice Day. My little brother was born on Nov 11th. He was always happy not to go to school on his birthday. It seem that the calendar had Armistice Day as a holiday long after the name was changed to Veteran's Day.