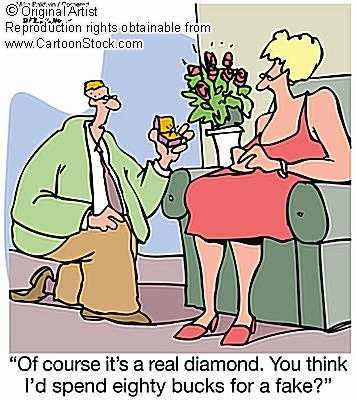 I was on MSN.COM reading about the best and worst marriage proposals and it reminded me of my proposal to Judy (the wife formally known as Sweet Tea.)

We were at the mall. I had to go to the Electrolux store because I needed some vacuum cleaner bags, and we were sitting in a pair of chairs waiting for my order to come up. I turned to her, held out an open box with her engagement ring and ask her, “Will you and the kids be my tax deduction?”

She hugged my neck and said she would, and I have to tell you, that was the best tax deduction I have ever had. We made a killing that year on our return because we got married on Dec. 31, in the Cherokee County Court House. And she has continued to be my best deduction for over 15 years – though the kids have gone their own ways.

How romantic was your proposal? I know you can’t top mine, but give it a try.

Posted by Coffeypot at 1:20 PM

We were sleeping on the floor in my sisters appartment when he was home on leave and he shoved the ring at me and said, here look at this.

That was my proposal. Although a few years later he bought me a better ring and did the whole on his knee thing. It was nice. 16 years for us.

When he said, 'here, look at this.' did you know he was talking about the ring or...

First off .. I'm impressed that you own the Cadillac of vacuum sweepers. But just because you own it, doesn't mean you run it.

My marriage proposal went something like .. "Darlin', if I don't marry you now that your pregnant, your Daddy is gonna blow my head off!"

e.craig, that was how my first marriage came about.

What did you think of my Winter Of Life post? I though of you and BD when I read it, since we represent the upper regions of the age category – I mean we are in the dead of winter.

Pam, it’s true. I am. I tell my Judy, you’re eyes look like two hen turds in a bowl of clabber, or your ears are as cute as mud flaps on a gopher’s ass, or when you walk your ass looks like two puppies playing under a blanket. She swoons every time. Some of us men just have IT.

My ring came in a wrapped box with a bottle of floor sand [used to crunch up the floor for line dancing? I think they call it "wax"...it so is NOT]

Anyway, he laid it in my lap on Christmas day and said "Whaddya think?"

Well, I guess whatever works is the best proposal possible, huh?

I cannot remember how I proposed.

I have not been able to remember anything since then.

Ok. I think mine topped you all. Really! We went to New Orleans for a night on the paddlewheel riverboat, The President. There were 4 levels and each level had a different type of band. Rock, Country, Blues and Jazz. Naturally, we were on the Rock level. I excused myself to go to the restroom. When I got back Guy had a bottle of champagne in his hands, popping off the cork. He poured us a glass and we toasted. As I looked down in my glass, a huge diamond ring was lying in the bottom. I gasped as I took it out. He bent down on his knee while putting it on my finger and asked me to marry him. We just celebrated our 33rd anniversary. I'm such a sap for romance! :hehe:

Skippy, did you save the box of ‘wax’ and did the ring keep sliding off your finger from being in the ‘wax’?

RWA, you are correct. No matter how it is said or hinted at, it’s the same question with the same answer.

BD, I’m not allowed to remember much.

Miss Tookie, I’m just glad you didn’t swallow the ring. You would have to check your poop with a stick until you found it. Sooooo romantic!

Home on leave for me, just got in and went over to her house for Christmas Eve (BIG polish feast, yum, yum) we sat up most of Christmas Eve just talking, so I asked if she would marry me, so I could get some sleep before sunup.
Been 42 1/2 years, , holy shit, that's 64% of my entire life thus far! She is gotta be tough to put up with me that long!!
Mr. Guinness

Well on our anniversary my hubby to me out for a very nice dinner then took me to my favorite part of the rock garden here in town and got down on bended knee and asked me to marry him. And obviously I said yes.

The other marriage proposal I had before I had ever met my husband was from my high school sweet heart. We feel in love from the first time we saw each other and one night after making love by canlelight he asked me to marry him. I said yes to that one, but time went on, things happened and we never did get married.

But now I have my hubby and my beautiful baby girl. :)


james asked me to marry him infront of the bathrooms in AIT.

Mine was in the toilet, he had run out of toilet paper and when I brought it to him, he asked me to marry him.
Mr. Romance.