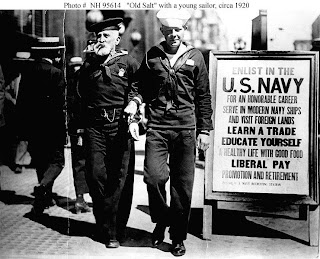 The Old Salt spat at a passing rat, and borrowed a match from me:

Then scratched a match where his pants were tight, and spake quite fervently;

“I’ll swear by gum, that it strikes me dumb – this kind of dang navee.

With not a sail, nor even a brail, and dog watches drinking tea.

‘Twas some years back that I took a crack at serving Uncle Sam;

An’ ‘taint the same – except maybe the name – as ‘twere in them days, by damn!

We went aloft if the Old Man coughed, or if it began to blow;

And got a root from a gov-ment boot if maybe we went too slow.

A trick at the wheel took an arm o’ steel, and lots of plain beef y’see.

But now it’s did by a high school kid, and patent ‘lectricitee.

We got our rum an’ slap o’ slum almost every day or so,

An’ mouldy bits of ship’s biskits if stores was running low.

Today I seed how these youngsters feed – the mess what they get each day,

An’ strike me pink, if I don’t think I’d bin in a swell cafay.

It used to be that a man at sea was a sailor. It makes me bile

To see the way they cruise today with radiums, gas an’ ile.

An’ not content to remain where meant – on toop – where a ship should sail,

They go and man a sheet-iron can an’ dive like a blasted whale.”

The Old Salt spat, donned his hat, give a hitch to those pants of his.

He’d said his say – so he creaked away, all itches and rheumatiz.

For sailor-man, since the flood began, and Noah put to sea,

He raised his plaint – “AH – THE NAVY AIN’T WHAT THE NAVY USED TO BE!” 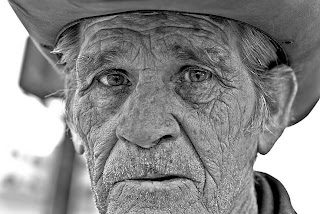 Cowpoke: “Give me three packet of condoms, please.”

Cashier: “Do you need a paper bag with that, sir?” 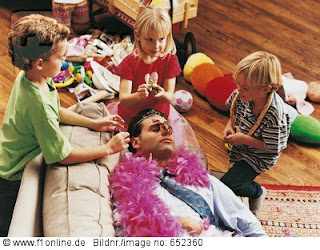 GOD CREATED CHILDREN (AND IN THE PROCESS GRANDCHILDREN)

To those of us who have children in our lives, whether they are our own, grandchildren, nieces, nephews, or students…here is something to make you chuckle.

Whenever your children are out of control, you can take comfort from the thought that even God’s omnipotence did not extend to His own children.

After creating heaven and earth, God created Adam and then Eve.

And the first thing He said was, “DON’T!”

“Because I am your Father and I say so!” God replied, wondering why He hadn’t stopped creation after the Elephants.

A few minutes later, God saw His children having an apple break and He was pissed.

“Didn’t I tell you not to eat of the forbidden fruit?” God asked.

“She started it!” Adam said, pointing his finger at Eve.

Having had it with the two of them, God’s punishment was that Adam and Eve should have children of their own. Thus the pattern was set and it has never changed.

If you have persistently and lovingly tried to give children wisdom and they haven’t taken it, don’t be hard on yourself.

If God had trouble raising children, what makes you think it would be a piece of cake for you?

1. You spend the first two years of their life teaching them to walk and talk. Then you spend the next sixteen years telling them to sit down and shut up.

2. Grandchildren are God’s reward for not killing your own children.

3. Mothers of teens now know why some animals eat their young.

4. Children seldom misquote you. In fact, they usually repeat word for word what you shouldn’t have said in the first place.

5. The main purpose of holding children’s parties is to remind yourself that there are children more awful than yours.

6. We childproof our homes, but they still get in.

So, if you have a lot of tension and headaches, do what it says on the aspirin bottle:

“Take two aspirin and KEEP AWAY FROM CHILDREN!” 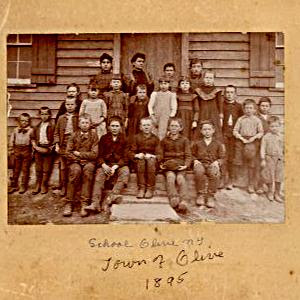 Remember when grandparents and great-grandparents stated that they only had an 8th grade education? Well, check this out. I don’t think any of us could have passed the 8th grade in 1895 with our current education.

This is the eight-grade final exam from 1895 in Salina, Kansas. It was taken from the original document on file at the Smokey Valley Genealogical Society and Library in Salina, and reprinted by the Salina Journal.

1. Give nine rules for the use of capital letters.

2. Name the parts of speech and define those that have no modifications.

6. What is punctuation? Give rules for principal marks of punctuation.

7 – 10. Write a composition of about 150 words and show therein that you understand the practical use of the rues of grammar.

1. Name and define the Fundamental Rules of Arithmetic.

10. Write a Bank Check, a Promissory Note, and a Receipt.

1. Give the epochs into which U.S. History is divided.

2. Give an account of the discovery of America by Columbus.

3. Relate the causes and results of the Revolutionary War.

4. Show the territorial growth of the United States.

5. Tell what you can of the history of Kansas.

6. Describe three of the most prominent battles of the Rebellion.

7. Who were the following: Morse, Whitney, Fulton, Bell, Lincoln, Penn, and Howe?

1. What is meant by the following: alphabet, phonetic, orthography, etymology, syllabication.

2. What are elementary sounds? How classified?

3. What are the following, and give examples of each: trigraph, subvocals, diphthong, cognate letters, and lingual.

4. Give four substitutes for caret ‘u’.

5. Give two rules for spelling words with final ‘e’. Name two exceptions under each rule.

6. Give two uses of silent letters in spelling. Illustrate each.

7. Define the following prefixes and use in connection with a word: bi, dis-mis, pre, semi, post, non, inter, mono, sup.

10. Write 10 words frequently mispronounced and indicate pronunciation by use of diacritical marks and by syllabication.

1. What is climate? Upon what does climate depend?

2. How do you account for the extremes of climate in Kansas?

4. Describe the mountains of North America.

6. Name and locate the principal trade centers of the U.S.

7. Name all the republics of Europe and give the capital of each.

8. Why is the Atlantic Coast colder than the Pacific in the same latitude?

9. Describe the process by which the water of the ocean returns to the sources of rivers.

Notice that the exam took FIVE HOURS to compete. Gives the saying ‘He only had an 8th grade education’ a whole new meaning, doesn’t it.

No wonder they dropped out after 8th grade. They already knew more than they needed to know.

And no, I don’t have the answers, either! I don’t even understand most of the questions. And I don’t think I ever did.

Of course, if I had attended classes at that school, and I worked on a farm, and I had to know about weights, sizes and cost of stuff going to the market, I might have made a decent showing. Or Not! I didn’t pay much attention in the Atlanta City School System back in the day. I don’t see that it would have been any different in Kansas.