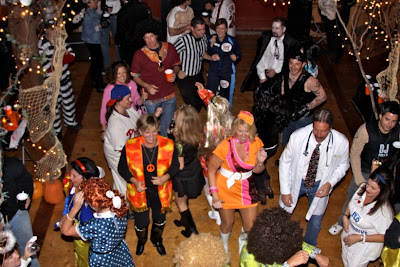 Last year Judy and I were invited to a swanky masked Halloween Party.  However, Judy got a terrible headache and told me to go to the party alone.  I, being the ever devoted husband, protested.  But she argued and said she was going to take some aspirin and go to bed.  She said that there was no need for my good time being spoiled by not going.  So I took my costume and away I went.

After sleeping soundly for one hour, Judy awakened without pain, and as it was still early, she decided to go to the party.  In as much as I did not know what her costume looked like, she thought she would have some fun by watching me to see how I acted when she was not around.  She joined the party and soon spotted me cavorting around on the dance floor, dancing with every nice chick I could and copping a little feel here and a little kiss there.

Judy went up to me and, being a rather seductive babe herself, I dumped my partner high and dry and devoted my time to the new stuff that had just arrived.  She let him go as far as he wished; naturally, since she knew it was me.  Finally I whispered a little proposition in her ear and she agreed, so off they went to one of the cars and had a little bang.

Just before unmasking at midnight, Judy slipped away, went home and put the costume away and got into bed, wondering what kind of explanation I would make for my behavior.

She was sitting up reading when I came in and asked what kind of a time I had had.   I said, "Oh the same old thing.  You know I never have a good time when you're not there."

Then she asked, "Did you dance much?"

I replied, "I'll tell you, I never even danced one dance.  When I got there, I met Pete, Bill Brown and some other guys, so we went into the den and played poker all evening.  But I'll tell you... the guy I loaned my costume to sure had a real good time!"


This has nothing to do with the story, I just thought it was a cool costume... 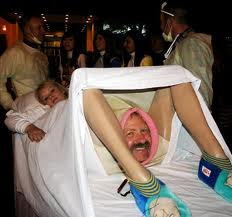 GARDEN SNAKES CAN BE DANGEROUS...

Judy and I have a lot of potted plants.  During a recent cold snap Judy was bringing some of the valued tender ones indoors to protect them from the cold night.  It turned out that a little green tree snake was hidden in one of the plants.

When it had warmed up, it slithered out and Judy saw it go under the couch.  She let out a very loud scream.

I (who was taking a shower) ran out into the living room naked to see what the hell the problem was.  She told me there was a snake under the couch.  So I got down on the floor on my hands and knees to look for it.

About that time the family dog came over and cold-nosed me on the ass.  I thought the snake had bitten me, so I screamed and fell over on the floor passed out.  Judy thought I had had a heart attack, so she covered me up, told me to lie still and called an ambulance.

I came around as the paramedics rushed in, but they would not listen to my protests and loaded me on the stretcher and started carrying me out.

Just then, the snake came out from under the couch and one paramedic saw it.  He yelled and dropped his end of the stretcher.  That's when I broke my leg, and why I ended up in the hospital for real.

Judy still had the problem of the snake in the house, so she called our neighbor, Jim, who volunteered to capture the snake.  He armed himself with a rolled-up newspaper and began poking under the couch.

Soon he decided it was gone and told Judy, who sat down on the couch in relief.  But while relaxing, her hand dangled in between the cushions, where she felt the snake wriggling around.  She screamed and fainted; the snake rushed back under the couch.  Jim, seeing Judy lying there passed out, tried to use CPR to revive her.

At the same time Jim’s wife, who had just returned from shopping at Kroger’s, saw him apparently kissing Judy on the mouth and slammed him in the back of the head with her bag of canned goods, knocking him out and cutting his scalp to a point where it needed stitches.

The noise woke Judy from her dead fain, saw Jim lying on the floor with his wife bending over him, so she assumed that the snake had bitten him.  She went to the kitchen and got a small bottle of whiskey, and began pouring it down the man's throat (I don’t know why she did that as it would have no effect on a snake bite.)

Anyway, by now the police had arrived.  They saw the unconscious Jim, smelled the whiskey, and assumed that a drunken fight had occurred.  They were about to arrest them all, when Judy explain how it all happened over a little garden snake!

The police called an ambulance, which took Jim away along with his sobbing wife.

Now, the little snake again crawled out from under the lounge and one of the policemen drew his gun and fired at it.  Of course he missed the snake but hit the leg of the end table instead.

The table fell over breaking the lamp that was on it and shattered light bulb which started a fire in the curtains.  The other policeman, while trying to beat out the flames, fell through the window into the yard on top of the dog.   That startled the dog and he ran out of the yard into the street, where an oncoming car swerved to avoid it and smashed into the parked police car.

Meanwhile, neighbor’s saw the burning curtains and called in the fire department.  The firemen had started raising the fire ladder when they were halfway down the street.  The rising ladder tore out the overhead wires, put out the power, and disconnected the telephones in a ten-square city block area (but they did get the house fire out).

Time passed!  The snake was caught and both me and Jim were discharged from the hospital, the house was repaired, the dog came home, the police acquired a new car, and all was right with their world.

A while later, we were watching TV and the weatherman announced a cold snap for that night.  Judy asked if I thought we should bring in the potted plants for the night.

And that's when I shot her.

US Navy Then and Now

I am glad and proud that I served in the Old Navy...

Q: I’m two months pregnant now. When will my baby move?
A: With any luck, right after he finishes college.

Q: What is the most reliable method to determine a baby’s sex?
A: Childbirth.

Q: My wife is five months pregnant and so moody that sometimes she’s borderline irrational.
A: So what’s your question?

Q: My childbirth instructor says it’s not pain I’ll feel during labor, but pressure.  Is she right?
A: Yes, if the same way that a tornado might be called an air current.

Q: When is the best time to get an epidural?
A: Right after your find out your pregnant.

Q: Is there anything I should avoid while recovering from childbirth?
A: Yes! Pregnancy!

Q: Do I have to have a baby shower?
A: Not if you change the baby’s diaper very quickly.

Q: Our baby was born last week. When will my wife begin to feel and act normal again?
A: When the kids are in college.

Q: Is there any reason I have to be in the delivery room while my wife is in labor?
A: Not unless the word ‘alimony’ means anything to you. 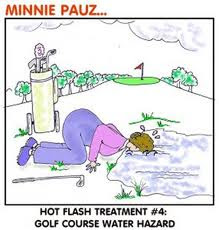 10 WAYS TO KNOW IF YOU HAVE ‘ESTROGEN ISSUES’

10. Everyone around you has an attitude problem.
9. You’re adding chocolate chips to your cheese omelet.
8. The dryer has shrunk every last pair of your jeans.
7. Your husband is suddenly agreeing to everything you say.
6. You’re using your cell phone to dial up every bumper sticker that says: ‘How’s My Driving”.
5. Everyone’s head looks like an invitation to batting practice.
4. Everyone seems to have just landed here from ‘outer space.’
3. You’re sure that everyone is scheming to drive you crazy.
2. The ibuprofen bottle is empty and you bought it yesterday.
1. You can’t believe they didn’t make a tampon bigger than Super Plus. 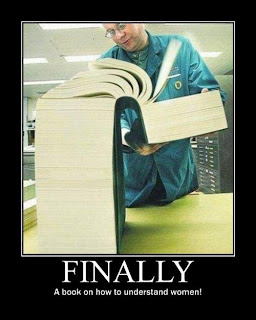 10. Cat’s facial expressions.
9. The need for the same style of shoes in different colors.
8. Why bean sprouts aren’t just weeds.
7. Fat clothes.
6. Taking a car trip without trying to beat your best time.
5. The difference between beige, ecru, cream, off-white, and eggshell.
4. Cutting your hair to make it grow.
3. Eyelash curlers.
2. The inaccuracy of every bathroom scale ever made.
AND THE NUMBER ONE THING ONLY WOMEN UNDERSTAND
1. OTHER WOMEN!