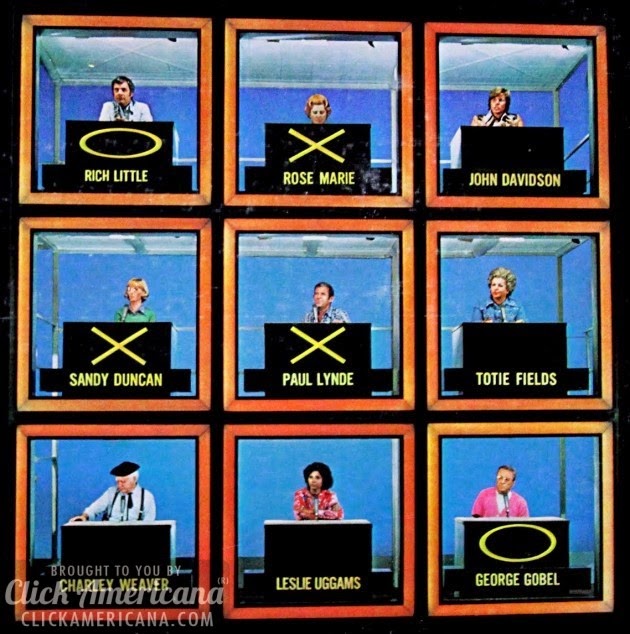 FOR THOSE OF US WHO REMEMBER Hollywood Squares:
These some of the funniest and greatest answers from the days when 'Hollywood Squares' game show responses were spontaneous, not scripted, as they are now.  Peter Marshall was the host asking the questions, of course...


Q - Paul, what is a good reason for pounding meat?
A - Paul Lynde: Loneliness!
(The audience laughed so long and so hard it took up almost 15 minutes of the show!)

Q - Do female frogs croak?
A - Paul Lynde: If you hold their little heads under water long enough.

Q - If you're going to make a parachute jump, at least how high should you be?
A - Charley Weaver: Three days of steady drinking should do it.

Q - You've been having trouble going to sleep. Are you probably a man or a woman?
A - Don Knotts: That's what's been keeping me awake.


Q - According to Cosmopolitan, if you meet a stranger at a party and you think that he is attractive, is it okay to come out and ask him if he's married?
A - Rose Marie: No wait until morning.

Q - Which of your five senses tends to diminish as you get older?
A - Charley Weaver: My sense of decency.


Q - In Hawaiian, does it take more than three words to say 'I Love You'?
A - Vincent Price: No, you can say it with a pineapple and a twenty.


Q - As you grow older, do you tend to gesture more or less with your hands while talking?
A - Rose Marie: You ask me one more growing old question Peter, and I'll give you a gesture you'll never forget.


Q - Paul, why do Hell's Angels wear leather?
A - Paul Lynde: Because chiffon wrinkles too easily.

Q - Charley, you've just decided to grow strawberries. Are you going to get any during the first year?
A - Charley Weaver: Of course not, I'm too busy growing strawberries.

Q - It is considered in bad taste to discuss two subjects at nudist camps. One is politics, what is the other?
A - Paul Lynde: Tape measures.


Q - During a tornado, are you safer in the bedroom or in the closet?
A - Rose Marie: Unfortunately Peter, I'm always safe in the bedroom.


Q - Can boys join the Camp Fire Girls?
A - Marty Allen: Only after lights out.


Q - When you pat a dog on its head he will wag his tail. What will a goose do?
A - Paul Lynde: Make him bark?

Q - If you were pregnant for two years, what would you give birth to?
A - Paul Lynde: Whatever it is, it would never be afraid of the dark.

Q - According to Ann Landers, is there anything wrong with getting into the habit of kissing a lot of people?
A - Charley Weaver: It got me out of the army.


Q - It is the most abused and neglected part of your body, what is it?
A - Paul Lynde: Mine may be abused, but it certainly isn't neglected.

Q - Back in the old days, when Great Grandpa put horseradish on his head, what was he trying to do?
A - George Gobel: Get it in his mouth.


Q - Who stays pregnant for a longer period of time, your wife or your elephant?
A - Paul Lynde: Who told you about my elephant?


Q - When a couple have a baby, who is responsible for its sex?
A - Charley Weaver: I'll lend him the car, the rest is up to him.


Q - Jackie Gleason recently revealed that he firmly believes in them and has actually seen them on at least two occasions. What are they?
A - Charley Weaver: His feet.


Q - According to Ann Landers, what are two things you should never do in bed?
A - Paul Lynde: Point and laugh.