I stole this from my buddy, Sarge, over at Sargent Charlie.

It's good to see a Man of God who also loves the earthly pleasures God provides, and who does not take himself so seriously.  We need more like him.
.
.
Posted by Coffeypot at 10:55 PM 4 comments:

Watching Over Our Fallen 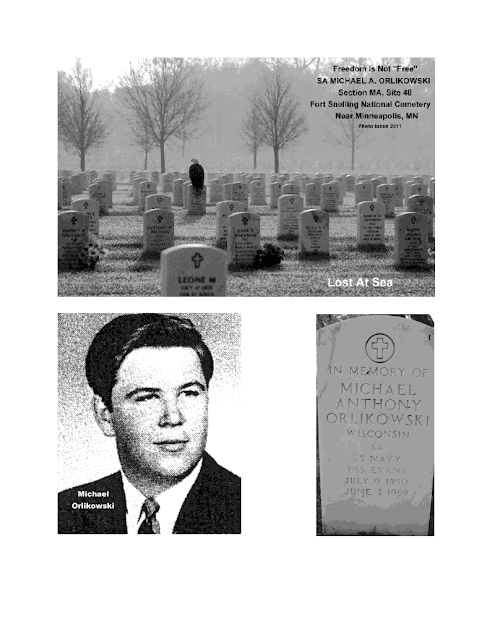 The photo at the top was sent to me last week.  It showed a Bald Eagle  standing watch over a Military Cemetery in Minnesota, and I thought it was an awesome sight.
Then my USS Frank E. Evans DD754 Association’s historian, Frank Jablonski, resent the picture you see above.  One of the "Lost 74", SA Michael A. Orlikowski, has a headstone dedicated to him there: Section MA, Site 48.
SA Orlikowski’s official grave is in the South China Sea, but the headstone was erected in his memory.
That made it even more special to me and I wanted to share it with you, too.
Lest We Forget…
Posted by Coffeypot at 9:54 PM 8 comments:

Judea And Samaria or The West Bank

Posted by Coffeypot at 11:47 PM No comments: 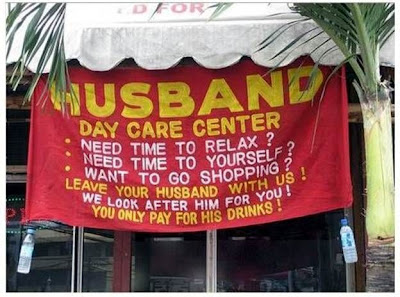 Judy says it's worth it.
Posted by Coffeypot at 6:35 PM 9 comments: 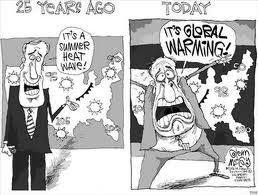 It's so hot:
I can roast marshmallows on my belly.
You eat hot peppers to cool your mouth off.
You can make instant sun tea.
You learn that a seat belt makes a pretty good branding iron.
When the temperature drops below 95, you feel a bit chilly.
You discover that it takes only 2 fingers to drive your car.
The best parking place is determined by shade instead of distance.
Hot water now comes out of both taps.
You actually burn your hand opening the car door.
You break a sweat the instant you step outside at 7:30 a.m.
Your biggest bicycle wreck fear is, "What if I get knocked out and end up lying on the pavement and cook to death?"
You realize that asphalt has a liquid state.
I saw a bunch of winos passing around a Dilly Bar!
It's so hot I saw squirrels fanning their nuts.
Farmers are feeding their chickens crushed ice to keep them from laying hard boiled eggs.
The cows are giving evaporated milk.
Satan decided to take the day off.
I saw a dog chasing a cat and they were both walking.
Calista Flockhart was spotted eating some ice cream…and she almost ate a second spoonful.
It's hotter than a June bride in a feather bed.
It's hotter than Georgia asphalt.
It's hotter than Paris Hilton's panties.
.
.
Posted by Coffeypot at 8:39 AM 5 comments:

Labels: How Hot Is It

My Belief and Sentiments Exactly!

Labels: We The People 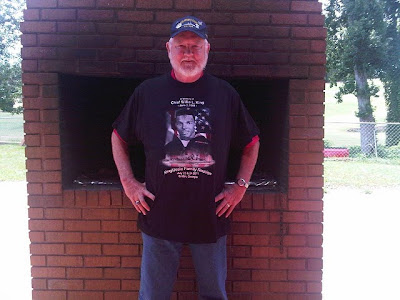 As you can see, they had some t-shirts made with Willie’s picture imposed above the ship.  A very cool shirt, indeed! 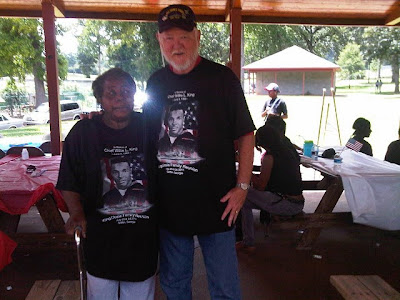 But the height of the visit was in meeting Willie’s wife, Ophelia, who has stayed true to his memory all these years.   She is a gracious lady in her 80’s and a credit to his memory.  You can tell by the children, who are as nice and friendly as only those can be who are raised with all the love and caring can be given by a loving mother. 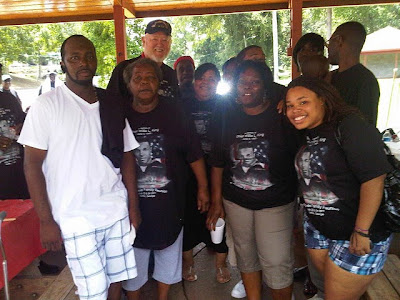 This is some of the family. Willie's youngest son, Kelvin, is on the left next to Ophelia. I will have to find out the names of the other family members.


As with most of the families of that tragedy, the King family has had very little information about how Willie died and the cause of the accident.  They were starved for information and for contact with anyone who knew him.  Unfortunately there are no survivors from Georgia that I know of, and other former crew members who live in South Georgia were unable to attend.   However, I was able to give them what life was like on board a US Navy ship at sea during the 60’s, what little information I have been told about Willie and a little about the accident.
With any luck and the good graces of the Lord, I hope his wife, sisters and children, along with over 120 other kin people, have some peace and closure.  I do know they ask many questions and received something to pass on to other generations.  And I got a great reunion meal.  Good cooks, those King ladies.
As far as I know, this is the first family reunion any of the association members have been involved and I hope it is not the last.  It is a great way to get the family involved in our efforts to get the 74 names on the Vietnam Memorial Wall and to get some type of memorial in each state who had a lost member.
Thank you, King family, for allowing me to be a part of your day.  Lest We Forget!!!
.
.
Posted by Coffeypot at 8:59 PM 11 comments: 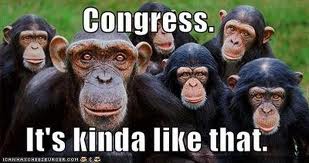 DEMOCRAT
You have two cows.
Your neighbor has none.
You feel guilty for being successful.
You push for higher taxes so the government can provide cows for everyone.

REPUBLICAN
You have two cows.
Your neighbor has none.
So?

SOCIALIST
You have two cows.
The government takes one and gives it to your neighbor.
You form a cooperative to tell him how to manage his cow.

COMMUNIST
You have two cows.
The government seizes both and provides you with milk.
You wait in line for hours to get it.
It is expensive and sour.

CAPITALISM, AMERICAN STYLE
You have two cows.
You sell one, buy a bull, and build a herd of cows.

BUREAUCRACY, CANADIAN STYLE
You have two cows.
Under the new farm program the government pays you to shoot one, milk the other, and then pour the milk down the drain.

AMERICAN CORPORATION
You have two cows.
You sell one, lease it back to yourself and do an IPO on the 2nd one.
You force the two cows to produce the milk of four cows.
You are surprised when one cow drops dead.
You spin an announcement to the analysts stating you have downsized and are reducing expenses.
Your stock goes up.

FRENCH CORPORATION
You have two cows.
You go on strike because you want three cows.
You go to lunch and drink wine.
Life is good.

JAPANESE CORPORATION
You have two cows.
You redesign them so they are one-tenth the size of an ordinary cow and produce twenty times the milk.
They learn to travel on unbelievably crowded trains.
Most are at the top of their class at cow school.

GERMAN CORPORATION
You have two cows.
You engineer them so they are all blond, drink lots of beer, give excellent quality milk, and run a hundred miles an hour.
Unfortunately they also demand 13 weeks of vacation per year.

ITALIAN CORPORATION
You have two cows but you don't know where they are.
You break for lunch.
Life is good.

TALIBAN CORPORATION
You have all the cows in  Afghanistan, which are two.
You don't milk them because you cannot touch any creature's private parts.
You get a $40 million grant from the US government to find alternatives to milk production but use the money to buy weapons.

IRAQI CORPORATION
You have two cows.
They go into hiding.
They send radio tapes of their mooing.

POLISH CORPORATION
You have two bulls.
Employees are regularly maimed and killed attempting to milk them.

BELGIAN CORPORATION
You have one cow.
The cow is schizophrenic.
Sometimes the cow thinks he's French, other times he's Flemish.
The Flemish cow won't share with the French cow.
The French cow wants control of the Flemish cow's milk.
The cow asks permission to be cut in half.
The cow dies happy.

CALIFORNIA CORPORATION
You have millions of cows.
They make real  California cheese.
Only five speak English.
Most are illegal.
Arnold likes the ones with the big udders.
.
Posted by Coffeypot at 10:10 PM 7 comments: 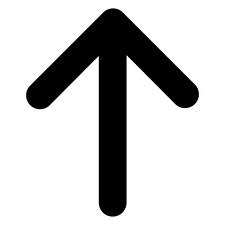 Here is the one word in the English language that can be a Noun, Verb, Adjective, Adverb, and Preposition (and it’s not the ‘F’ word that I wrote about earlier.)
UP
This two-letter word in English has more uses than any other word, and it is 'UP.'

It's easy to understand UP meaning towards the sky or at the top of the list, but when we awaken in the morning, why do we wake UP?

At a meeting, why does a topic come UP?  Why do we speak UP, and why are the political officers UP for election and why is it UP to the Secretary to write UP a report?

We call UP our friends, brighten UP a room, polish UP the silver, warm UP the leftovers and clean UP the kitchen. We lock UP the house and fix UP the old car1

At other times, this little word has real special meaning.  People stir UP trouble, line UP for tickets, work UP an appetite, and think UP excuses.

And this UP is confusing:  A drain must be opened UP because it is stopped UP.  We open UP a store in the morning but we close it UP at night.

We seem to be pretty mixed UP about UP!

To be knowledgeable about the proper uses of UP, look it UP in the dictionary.  In a desk-sized dictionary, it takes UP almost 1/4 of the page and can add UP to about thirty definitions.

If you are UP to it, you might try building UP a list of the many ways UP is used.  It will take UP a lot of your time, but if you don't give UP, you may wind UP with a hundred or more.

Did that one crack you UP?

Don't screw UP.   Send this on to everyone you look UP in your address book…or not.  It's UP to you.

I ran across this song from the mid 70's tonight and I still love it.  Angel was discovered by Gene Simmons performing in a bar in Washington, D.C. and had them sign with KISS's record label.  Along the the super long and beautiful (in a feminine sort of look) hair, they wore all white outfits in contrast to KISS's black garb. Be sure to put on your head sets or ear buds. The music is beautiful.

Some Tuesday Funny For You...And They Are So True...I Resemble Much Of This.

Tenia Que Ser Mujer
(It Had To Be A Woman)


Mujer Tenia Que Sr
(Women Had To Be)


The Dog Is Trained Right


O Melhor Amigo Homen
(Something About A Friend And A Dog)

Fairy God Mother - My Kind Of Luck Too 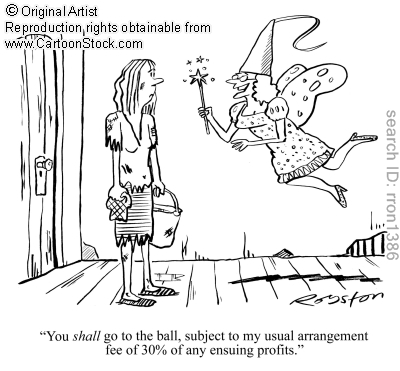 As a lady sat on the front porch reflecting on her life, a fairy godmother suddenly appeared and offered to fulfill three wishes for her.
“Well,” she said, “I would love to be rich.”
POOF: The fairy godmother turned her rocking chair into solid gold.
“And I wouldn’t mind being a young and beautiful princess.”
POOF: The woman was turned into an exquisite young princess with a priceless crown of jewels.
“Your third wish?” asked the fairy godmother.
While the woman was thinking this over her dog raised his head and uttered a single weak, horse “woof.”
“Could you possibly turn my  wonderful dog into a handsome prince?”
POOF: There in front of the beautiful princess stood the most handsome young man she had ever seen, more handsome than she could possibly have imagined.
She stared at him in awe, completely smitten.  As she stared at him in utter awe, he came slowly toward her.  He knees weakened as he bent down to her.
He brushed his lips across her ear and whispered, “Now I bet you’re sorry you had me neutered.”
Posted by Coffeypot at 12:54 AM 8 comments: