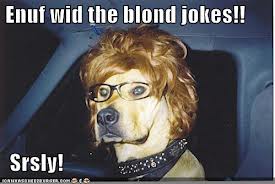 This is to make blonde women feel better, right?
Well, it might if they understand them…

With the ‘Fiscal Cliff’ looming with no compromise evident, and the Speaker of the House, RINO John Boehner, having no support by the GOP and unable to reach a compromise with Heir Obama, we are doomed to higher taxes, more entitlement spending for the support of the useless, lazy, illegal aliens and American trash.  But the gubment will save some money by cutting 140,000 of our military and putting them in the unemployment line and adding to the increasing food stamp dependent category.   An addition not of their making, by the way.

Their service in appreciated, though.  Our soon to be Secretary of State, Senator John Kerry (D-MA), expressed profound gratitude for the Army's commitment to service.

“The US Army has tirelessly borne the brunt of war over the past decade,” said Kerry, “so if there’s anyone who has plenty of experience in the whole sacrifice department, it’s definitely them.”  Senator Kerry went on to thank the Army for its selfless service, but added, “It’s just, well, for 140,000 of you, your services are no longer required.”

Kerry was unavailable for further comment, as he was preparing to spend New Year’s Eve at his mansion in the Cayman Islands, on which he pays no taxes.

Not to worry, Troops. Our Socialist President, Heir Obama (speaking on closed circuit television to the soldiers of the 25th Infantry Division who were bussed to the gate of his vacation mansion in Hawaii for the occasion (and whom He wouldn’t face in person for their presence is beneath him) said, “I’m sure that the coming summer of recovery will find you all with better paying civilian jobs than those you had in the US Army.  I expect to see unemployment dip below 6% this summer.  You may be the beneficiaries of 1 million shovel-ready jobs that this third round of trillion dollar stimulus will create.”

So the unemployment will dip below 6% by adding 140,000 more to the millions already out of work?  But the good news is he will add to his increasing food-stamp society that he and the Liberal Socialist are so proud of creating.

I’m sure you are as happy as I am about the failure of the GOP to stand up to Obama thus creating higher taxes, more entitlement spending, increased unemployment by booting more of America’s finest out the door, and also allowing the TRAITOR, John Kerry to tour the world expanding Obama’s agenda of apologizing and building up the Muslim Brotherhood.

We Are Fucked, Peeps!

I have to thank LL over at Virtual Mirage (on my side bar) for his research on most of this post.  Y’all should read his stuff…he has plenty of smarts. 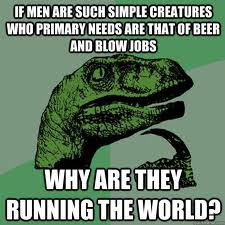 Men are such simple creatures!
Our last name stays put.
The garage is all ours.
Wedding plans take care of themselves.
Chocolate is just another snack.
We can be President.
We can never be pregnant.
We can wear a white T-shirt to a water park.
We can wear NO shirt to a water park.
Car mechanics tell us the truth.
The world is our urinal.
We never have to drive to another gas station restroom because this one is just too icky.
We don't have to stop and think of which way to turn a nut on a bolt.
Same work, more pay.
Wrinkles add character.
Wedding dress $5000; Tux rental $100!
People never stare at our chest when you're talking to them.
New shoes don't cut, blister, or mangle our feet.
One mood all the time!
Phone conversations are over in 30 seconds flat.
We know stuff about tanks.
A five-day vacation requires only one suitcase.
We can open all our own jars.
We get extra credit for the slightest act of thoughtfulness.
If someone forgets to invite us, he or she can still be our friend.
Our underwear is $8.95 for a three-pack.
Three pairs of shoes are more than enough.
We almost never have strap problems in public.
We are unable to see wrinkles in our clothes.
Everything on our face stays its original color.
The same hairstyle lasts for years, even decades.
We only have to shave our face and neck.
We can play with toys all our life.
One wallet and one pair of shoes - one color for all seasons!
We can wear shorts no matter how our legs look.
We can 'do' our nails with a pocket knife.
We have freedom of choice concerning growing a mustache.
We can do Christmas shopping for 25 relatives on December 24 in 25 minutes.


Yep! Being a man is so simple.

I was going to publish some pictures of our Christmas day, but my daughter-in-law told me, after I made the pictures, that she didn't want her picture posted on the web.  So here is all I can post. 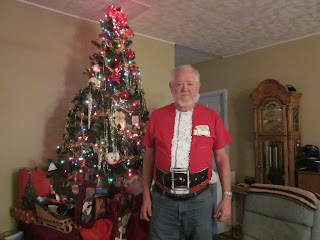 Even now I cannot get out of wearing the Santa outfit...
Then my uploading went to hell and the rest are the best I could get. 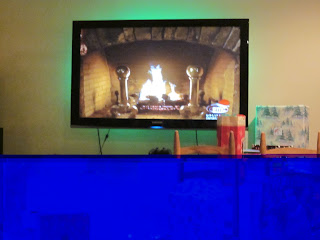 We do not have a fireplace in the house so the TV turned into our fireplace. 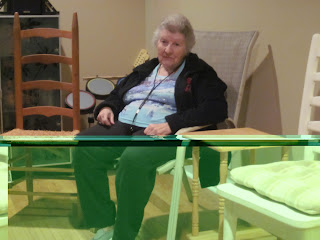 And this is Jabba Hutt... uh...Granny Dot in her typical 'I'm so old and helpless' look. 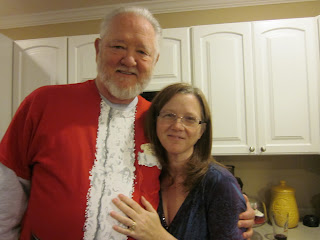 And my beautiful daughter, Marni... 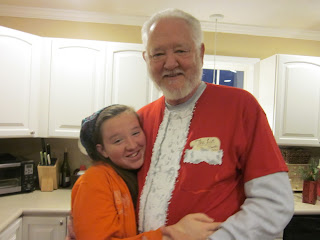 And my beautiful granddaughter, Jordan (Bug.)  I had to tickle her to get the 'I'm thirteen and way to cool for silly ass pictures with my grandpa' look off her face and make her smile.

All the other pictures had DIL in them and, well, ya knonw... 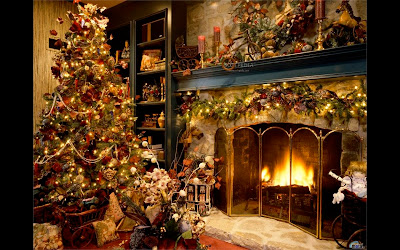 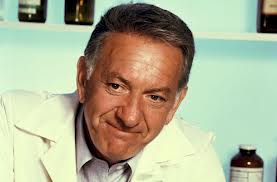 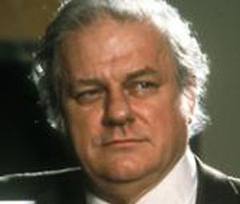