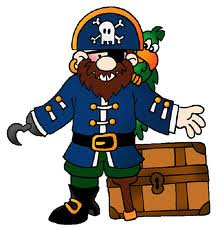 A pirate walks into a bar. The bartender said, "Hey, I haven't seen you in a while. What happened? You look terrible."

"What about the wooden leg? You didn't have that before."

The bartender replied, "Well, OK, but what about that hook? What happened to your hand?"

The pirate explained, "We were in another battle. I boarded a ship and got into a sword fight.

My hand was cut off. I got fitted with a hook but I'm fine, really."

"What about that eye patch?"

"Oh," said the pirate, "One day we were at sea, and a flock of birds flew over. I looked up, and one of them crapped in my eye."

"You're kidding," said the bartender. "You couldn't lose an eye just from bird crap."

"It was my first day with the hook." 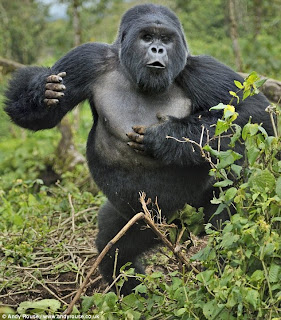 We were out doing stuff yesterday. Me, the grand-kids and Judy. We stopped off to have some lunch and were having a good time.

They seem to like it when I act…uh… unusual…like drawing my hands into claws and moan and drool spit from the corner of my mouth and falling on them. They do all the EWWWWs and Get Off Me stuff, but they like it. Huh? Yes the do. They get me to do it to one or the other. "PawPaw, act stupid on Bug." or "PawPaw, J-Man needs some loving." Stuff like that. They only get embarrassed when there are some cute girls or young boys around. Then it really gets fun...

Anyidiot, J-Man and I got to talking about mating calls. I DON’T KNOW! We just got on the subject. It happens.

I was telling him about my mating call…guaranteed to work every time. It is the sound of a gorilla grunting the words “UHONTSOM”. He tried it, but he didn’t have the sound down right so I showed him how again. I grunted “UHONTSOM” a little louder and at that moment the waitress walked up. I told J-Man, “See? It works every time.”

He was laughing so hard that the waitress commented that we were having a good time. I told her what was going on and she started laughing, too.

Timing is everything, Peeps.

On another topic…what is going on with my blog? All of a sudden it changed to one post per page, and you have to click on ‘older post’ to see others. I have checked the settings and cannot find how to get it back to showing a month’s worth at a time.

Any ideas or fixes?

Is this karma for being such an ass in public?

If so, then blogger will not be fixed. I have too much unrestrained fun when out with the kids…and Judy…and people… 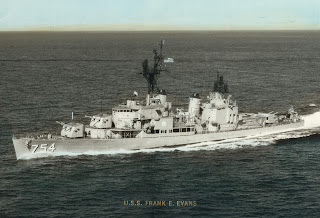 It is a day when we honor the men and women who have given their lifes in service or defense of our nation in ALL WARS.

For me it is a day to remember some shipmates. 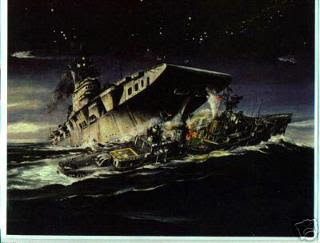 For me it is also a day I especially remember and honor my shipmates who lost their lives around 3:00 a.m. on 3 June, 1969, (43 years ago in six days) when my ship, USS Frank E. Evans DD 754, was accidentally cut in half in a nighttime collision with an aircraft carrier.

The front half rolled over and went down in three minutes carrying 74 officers, chiefs and enlisted men to their eternal rest. 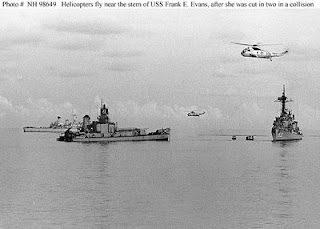 The morning showed this as all that was left. That is the USS Everett F Larson DD 830 on the right preparing to come alongside the aft section to secure her until the sea tug could arrive and tow her to Subic Bay, Philippines.

Below is a list of those 74 men. If you notice, there is a great many Seaman Apprentices and Firemen Apprentices listed. That is because a few weeks earlier she received a whole group of men straight from boot camp and a short leave home. They were still learning about shipboard life and their new career. And they were learning under combat conditions, too. She had been on the gun-line escorting a troop transport close into shore and providing fire support and illumination flares for the Marines just a few days earlier. And she was scheduled to go back on the gun-line a few days after the collision.

There were two Georgia boys aboard her that night. Chief Hospitalman (Corpsman) Charles Cannington of Atlanta, a true hero. When the ship was cut in half, all the electricity went out. The Chief was in the forward chief’s quarters and was the only one with a pin light. And he slept next to the ladder that went topside (the only way out as the door (not a watertight hatch) to the compartment was blocked). He stood at the bottom of the ladder with his pin light encouraging the other chiefs to get out. He didn’t make it. But most of the chiefs did.

And Chief Boatswain Mate Willie King of Thomaston! He had just made Chief and was very proud that he had. He was all smiles and an excellent teacher to the enlisted men. He made it out through the hatch but couldn’t swim. He was told to go into the water and grab anything floating. They saw him walking toward the water, but he was never seen again. It is believed he was sucked under when she went down because he didn’t swim away. His body was never found. At his family reunion last year, his sister told me that he always wanted to be in the Navy and told her, as a little boy, that he would be buried at sea. Freaky!

There were three brothers lost (the Sage’s), plus a father (Chief Reilly) saw his son (Larry) go down and my friend, Garry Hodgson, from my time on board. 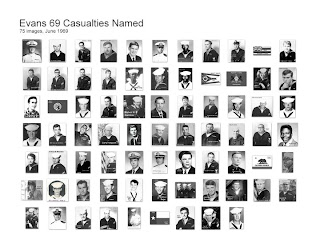 The men are, by rate/rank, name and city of record:

The only thing that will help these men rest in peace will be having their names added to the Vietnam Memorial Wall. My association has been working for 20 years to make this happen. We are close, but not there yet.

God bless them all…as well as anyone who has given their life in any manner while in uniform. We are a safer, better nation because of them.

Also, read my last post on the Memorail Service for the men from GA who survived 7 Dec 1941 but who have since passed on this year. They are true heroes and a couple are famous for that day, though you wouldn't know it by talking to them.