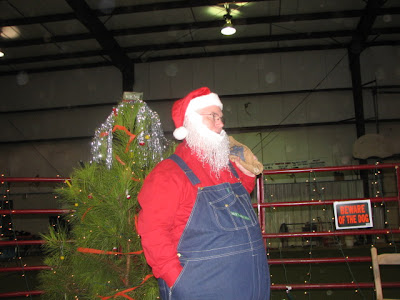 Due to the lingering economy, and following the advice of the UAW and CWA, a new contract for Santa has been negotiated...Please read the following carefully…

I regret to inform you that, effective immediately, I will no longer be able to serve the Southern United States on Christmas Eve. Due to the economy and the overwhelming current population of the Earth, my contract was re-negotiated by North American Fairies and Elves Local 209.

I now only serve certain areas of Ohio, Indiana, Illinois, Wisconsin and Michigan. I also get longer break for milk and cookies, so keep that in mind.

However, I am certain that your children will be in good hands with your local replacement that happens to be my third cousin, Bubba Claus. His side of the family is from the South Pole and he shares my goal of delivering toys to all good boys and girls. However, there are a few differences between us.

They are as follows:

1. There is no danger of a Grinch stealing your presents from Bubba. He has a gun rack on his sleigh and a bumper sticker that reads "This sleigh insured by Smith & Wesson".

2. Instead of milk and cookies, Bubba Claus prefers children to leave RC cola and pork rinds (or a moon pie) on the fireplace. And Bubba doesn't smoke a pipe. He dips a little snuff, though, so please have an empty spit can handy.

3. Bubba's sleigh is pulled by floppy-eared, flying coon dogs instead of reindeer. I made the mistake of loaning him a couple of my reindeer one time and Blitzen's head now overlooks Bubba's fireplace.

4. You won't hear "On Comet, on Cupid..." when Bubba Claus arrives. Instead you will hear "On Junior, on both you Bush's, on Martin and Labonte. On Jimmyjohson, on Edwards, on Biffle and Boyer. Dash away, dash away all before I take out your wedge and send you into the wall."

6. As required by Southern highway laws, Bubba Claus' sleigh does have Yosemite Sam mud flaps with the words "Back Off". The last I heard, it has other decorations as well. One is a Chevy logo with lights that race through the letters and the other is a caricature of me (Santa Claus) going wee-wee on the Tooth Fairy.

7. The usual Christmas movie classics such as "Miracle on 34th Street" and "It's a Wonderful Life" will not be shown in your viewing area. Instead you will see "Ernest Saves Christmas", “The Bad Santa” and "Smoky and the Bandit IV" featuring Burt Reynolds as Bubba Claus and dozens of state patrol cars crashing into each other.

8. Bubba Claus doesn't wear a belt. If I were you, I'd make sure that you, the wife and the kids turn the other way when he bends over to put the presents under the tree.

9. Don't look for the traditional stocking items this year either. Instead of chocolates and candy canes, children in the South can expect to find beef jerky, Vienna sausages and a can of Spam.

10. Toys will be assembled by Bubba Claus's elves in his Freedom Homes doublewide workshop.

11. And finally, lovely Christmas songs such as Rudolph the Red-nosed Reindeer" and "Santa Claus is Coming to Town" will be replaced. "Bubba Shot the Jukebox" and "Grandma Got Run Over by a Reindeer" will be played repeatedly on radio stations all over the South.

Posted by Coffeypot at 6:17 PM

Ai-yi-yi--Glad we in Michigan still get the real guy! LOL!

I think that since I am close to Michigan, I get the real guy too.
I have to say though, Shawn would love beef jerky instead of candy.

I suppose California is nothing close to "deep south."

phew....glad I don't live down South.

:giggling: This ole Southern gal will take what she can get!

Also, when he arrives you don't hear the sound of sleigh bells. You are greeted with the music from an 8track playing The Best of Waylon Jennings.

P.S. As a safety precaution please remove ALL grits from your home.

hmmm I think that was bubba claus that slipped between my sheets, saying if you want yer presents you better give me a present right now.

WOOHOO! I still get the real dude!

Scarlet's Kewpie doll is freaking me out.

This is possibly the best funniest thing I've read about Christmas this year. Or like, ever!

did you write it? If so you are a genius. OH heck you are anyways!

Biddie, I'm with Shawn, except for the Spam part.

BD, LA is on the same parallel as Atlanta, you may be in luck. Do you enjoy Spam?

Tookie Tail, and I bet you can get what ever you want, too.

Clew, 'muah' was a little sloppy but warm and delicious. Thank'ie!

Heidi that is the nicest thing you have ever said to me. But you have read enough of my crap...uh...serous writing to know I could never come up with something that clever. I just pass on the tidbits I receive from my friends. Although on this one, I did Google it on my very own. That doesn’t make genius…just a plagiarizing brainless twit.

And to all, Merry Christmas and a safe and happy New Year.