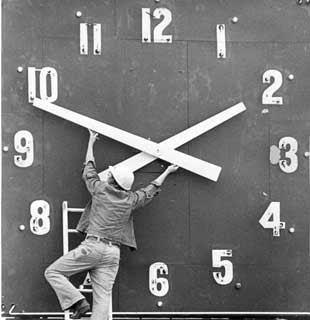 The time rolls back one hour tonight. This means an extra hour of sleep for those who observe the Daylight Savings Time rule each year. Not every state observes this practice, though. Arizona and Hawaii are the only two states who do not, and stay on ‘Standard Time‘ all year.

I find it strange how some people are effected by just one hour adjustment in time either way. I often wonder if this change in the body clock is actually a physical thing or psychological. I tend to think it is a combination of both.

As for me, I only get around three to five hours sleep a night (but cat-nap during the day) and my body is not controlled by a strict regiment or routine. So when the time changes, it means nothing to me. Except for one time.

During my boot-camp training at the US Naval Training Center San Diego (Co. 537, 1962), there is a week called ‘Service Week.’ During the forth week of training each company has to perform services for the rest of the boot-camp trainees. My company (except me) had to pull service in the chow-hall. This meant that we had to get up 4:00 A.M. to get to the chow hall to prepare for breakfast, wash pots and pans and clean up afterward, take a small break and start up again for the noon meal and again for the dinner meal, finishing up around 8:00 P.M.

Then you had to go back to the barracks and wash clothes and hang them out to dry overnight (hoping it didn’t rain.) This meant that lights-out was at 10:00 P.M. and those who were behind had to work in the dark, stand watch, or pass out form exhaustion only to be awaken at 4:00 A.M.

I said the this was my companies life that week but not me. I was given the assignment of being a messenger for the Master at Arms in the Admin Building. I delivered messages and packages all over the base on a bicycle, and I had to march the men in the brig over for meals (not a fun thing.) But much of the time was spent in the office of the Master at Arms reading books on Naval History and other military related stuff. But I still had to wake up with the company and do all the A.M. chores required by each company like cleaning the showers and the head (Navy term for shitter - uh - bathroom) and sweeping and swabbing (mopping) the barracks. This fell on me as I didn’t have to report to the Adman Building until 8:00 A.M.

But that October Saturday night of week 4 was the fall changing of the time and everyone got an extra hour sleep.

It was amazing how much happier and rested we felt with that one extra hour sleep. And it was Sunday morning and the last day of service week. It was like Christmas morning. The guys were laughing and joking around while the Shit, Shower and Shaving was going on. Even the recruits coming in for the meals seemed happier. And we kept telling each other that it was the extra hour sleep that made the difference. Did it? Or did we just think it did? Don’t know for sure.

So I guess it does play in physically as well as mentally how the time change effects us (uh, y’all.) How does it effect you?

But more important, don’t forget to change your clocks back tonight, no matter if you are in boot-camp or not.
Posted by Coffeypot at 2:35 PM

I really hate it that they mess with the time. After the change this weekend, I wish they would just leave it the hell alone! I would be interested to see it proven how the change of one hour can make any sort of significant difference in saving energy or money.....besides I am sick and tired of changing the time on all the clocks, watches, VCR's, coffee pot, oven, microwave and the answering machine. BAH humbug. (kicking soapbox into the corner)

I wish we could just do away with the time change!

For a couple days I'll feel more rested because of less rushing around in the morning.

There are areas in Arizona that do observe DST. However, not Phoenix. When California goes on Daylight Saving Time we are on the same clock as Phoenix.

I believe it is more a 'body clock' thing for me rather than being psychological.

Well, the sun comes up every morning regardless. It doesn't give a crap what the clock says. I have to say that I do like not dealing with DLS where I'm at...

Just our of curiosity, what made marching the prisoners a pain in the ass?

I agree with y’all that having daylight savings isn’t necessary. The only reason I can come up with is that you get an extra hour of daylight to spend time outdoors with your family after work. I can’t see that it save any energy and is just a pain in the ass.

Dack, I found escorting the prisoners to meals to be a pain in the ass for several reasons. First of all, it was just me and another dude marching 15 antisocial dudes to chow and all we had was a nightstick. They are already proven they have no respect for the service or anyone telling them what to do.

And to be honest, I was a little afraid of them.

For example, one big, huge, gargantuan, muscle bound, hate filled eyed black man wanted a second glass of mile. They were entitled to one glass. He said he was going to get his fucking milk and I wasn’t going to stop him. How’d he know that? Was it the fear in my eyes, the knees knocking, the quivering voice, the wet stain at my crotch? I never knew for sure.

Actually, I didn’t care if he got a second glass of milk. It wasn’t my place to beat discipline into him. They were on their way out of the Navy and didn’t give a shit about the Navy’s rules or regulations. Besides, they all cooperated by marching over and back without incident or causing any trouble.

And if I had tried to stop him I would have had to use the nightstick, and there were 14 other dudes that might have frowned on me doing that and then what would I do? I chose desecration over valor.

I’ve often wondered that if I have been armed would I have acted differently. I don’t think so. It was just a fucking glass of milk to someone who would not learn a lesson by not allowing him get it.

I get really tired around 6:00 p.m. when it goes dark. Just want to trundle into bed!

Like you, it makes no difference to me whether they change the time or not as I'm not affected by it. I doubt it saves as much energy as they say it does, but I'm sure Starbucks appreciates it!

I'm not a big fan of them messing with the time. All the reasons DST was instituted way back when are no longer legitimate now. I wish they'd just leave it alone.

That said, I DID appreciate the extra hour Sunday morning. It generally takes about a week for my body to fully adjust to the difference, especially at night.