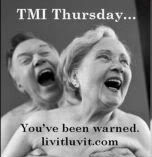 It's TMI Thursday again. Lilu at LIVITLUVIT is the mastermind behind this. Flip over and check her out and the link to past TMI's.

Last Thursday I mentioned something about a Greyhound bus ride. Unlike the Mile High Club, which I joined by the way, you don’t get a pin, or medal or free bail or anything for getting laid on a bus.

We had just returned for the Westpack (Western Pacific - Japan) and I was taking a couple of weeks leave to go home. The bus trip is three days and nights of travel, but it was about 1/8th the price of an airline ticket. So the bus it was.

As I sat down I looked around. The bus wasn’t full and there were three other sailors, a Marine and two Army guys on board, too. Then this girl came walking down the isle and sit one row back and across the isle from me. Nothing was said or anything. I don’t know about the other dudes, but I was waiting for Mr. or an SO to show up. But no one did. So as the bus was pulling out of the terminal I looked at the other guys. We all looked back and forth and at her. But no one moved or acted like they were going to make a move. I thought to myself that ’You Snooze; You Loose’, so I walked over and ask if I could sit with her.

We talked for the first couple of hours and a couple of bus stops, till the sun went down. She had just gotten kicked out of the Univ. of Hawaii for some infraction and was on her way back to Phoenix to regroup with her family.

The more we talked the closer I got to her. So after we pulled out the a bus stop somewhere in the mountains of California and it was dark outside, I leaned over and kissed her. She kiss back. BOING!!!

We made out for an hour or so. Then the petting started and BOING, BOING. About that time we crossed into Arizona and the bus pulled into a terminal where a lady came on board renting pillows and blankets. She rented a blanket. And when we pulled out, the seat across the isle had two of the sailors and the seat behind them had the Marine and one of the Army guys teasing us. Jealous fuckers. You snooze you loose.

So under the blanket my 13 buttons were undone and the flap pulled down and I was getting a great massage. I was able to get her jeans unbuttoned and down a little. Man, she had some hips. Anystroke, she ask if I had any protection. I thought an Angle was talking to me. But I said that I didn’t. She ask if I’d promise to pull out on time. I said, “No!” She gave me a jab in the gut and told me I had better. And rolled onto her left side and pulled her jeans down.

It was all I could do not to look over my shoulder and give the guys a huge grin like a opossum shitting a peach seed (I got that one from a blogging buddy) but I didn’t. I was cool. However inside I was doing the Mexican Hat Dance.

So the loving began. Not long, but at least I lasted long enough to get it in. She looked over her shoulder at me with a ’you didn’t just do that did you’ look. And I assured her I would be okay again shortly. I was and we did.

Not long afterward, we pulled into Phoenix where her two brothers met her. The guys were thanking her as she got out of her seat and she just bowed and said she was glad they enjoyed the show. She then turned and gave me one last kiss and walked out of my life for…a couple of weeks. We wrote each other for about a year, but I never got back to Phoenix and she got married to one of her college professors.

The rest of the trip home was pretty uneventful. But that was okay. I don’t think I could have topped the beginning of the trip anyway. You just don’t get that lucky twice in one bus trip.

That’s about it for my sex stories…well…maybe next week I’ll tell you about how I almost got killed and my room mate almost got his pecker bit off. We’ll see.

Now don’t stop here. Keep reading. There is a couple of awesome videos you need to see.
.
.
Posted by Coffeypot at 12:42 AM

No feelings of terror when her brothers arrived?
You are definately Mr Cool! :)

Oh my goodness, take the bus and save money?

I have to admit, I had never thought of busses in that way.

Great story!
"gotten kicked out of the Univ. of Hawaii for some infraction" Hmmmmm, I wonder. but then " she got married to one of her college professors." confirmed my suspicions.

All that fun aside, 3 days and 3 nights on a bus sounds like hell.

Go Greyhound, indeed! I don't know if I'll ever be able to ride on a bus again without thinking of you getting lucky on one!

I have had a similar experience.

Don't forget to link back for TMI Thursday! :-)

Go Greyhound and leave the driving to us!

So that's what happens in the back of the bus!!!

I'll never sit on a bus seat again with that in mind.
You are a man slut dude.

Greyhound really took you for a ride! LOL

Pax, if the brothes had come on the bus and ran down the isle I would have shit my pants. She was cool and didn't say anything to them, so there was no need to be upset or scared.

Mala, she was involved with a prof from Hawaii, but she married a prof from Univ of Arizona.

Erin, grab hubs and plan a trip. You migh like it.

ACE, I was doin't my own driving thank you very much.

CI Dude, I was, back in the day. Not so much anymore.

Tracie, all she had to do was say no.

Powder, got you in the tickle box, huh?

um. If she married one of her college professers..... maybe she was a (ahem) Democrat???

Back then, in the 60's, we were all Democrats. The GOP was a bunch of stuffy old farts. We had the asshole Kennedy’s. Young and progressive. Not so now.