The Drover and the Croc 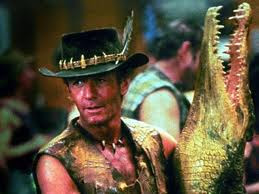 .
An Australian Drover walks into a bar with a pet crocodile by his side. He puts the crocodile up on the bar and turns to the astonished patrons.

'I'll make you a deal. I'll open this crocodile's mouth and place my manhood inside. Then the croc will then close his mouth for one minute. At that time he'll open his mouth and I'll remove my unit unscathed. In return for witnessing this spectacle, each of you will buy me a drink.'

The crowd murmured their approval.

The man stood up on the bar, dropped his trousers, and placed his Credentials and related parts in the crocodile's open mouth.

The croc closed his mouth as the crowd gasped.

After a minute, the man grabbed a beer bottle and smacked the crocodile really, really hard on the top of its head.

The crowd cheered, and the first of his free drinks was delivered.

The man stood up again and made another offer. 'I'll pay anyone $100 who's willing to give it a try.'

Oh God. I laughed out loud.

Oh man that was funny!!

I came, I saw and I laughed !!! Now my day is complete, by the way, I read all of them from the past few days again. You are funny indeed !!! Keep up the good work !!!

I guess it's true, blondes do have more fun.

I think I peed myself. That was hilarious!