Redneck Monday - The Last Of The Sayings - Maybe 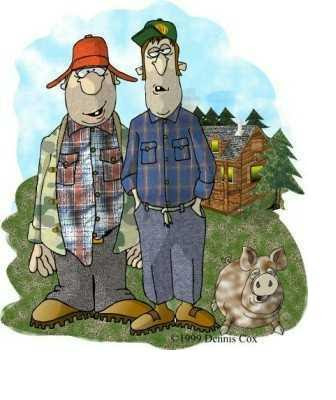 I think this will end the sayings for awhile. There are other redneck stuff to talk about next week. So untill then, learn and enjoy:

Howzyurmamaenthem? (How is your mama and them? - ‘Them’ being the rest of the family, relatives and anyone else closely associated with you.)

God made that there person as uuuugly as He could 'n then kick 'em in the face!

I gotta piss like a Russian race horse at the Kentucky Derby with a glue truck behind him.

The fish stinks from the head down.

You look like ten pounds of smashed assholes packed into a 5 pound bag.

That’s bout as dumb as lighting a match in a sealed room with ol grandma fartbags.

He couldn't hit the broad side of a barn while standing inside with the windows shut.

A couple of bubbles off 'plumb'.

Dumb as a cabbage.

Dumb as a fencepost.

Dumber than a barrel of spit and half as useful.

It was a long time ago, way back when I was knee-high to nothin'.

Just because your cat had her kittens in the oven doesn't make them muffins.

He's the meanest old bastard who ever shit behind shoe leather.

The last time I saw a mouth that big it had a hook in it.

He was banging her like a screen door in a hurricane.

I'll be back in a few, I have to drop the browns off at the super bowl.

He's slower than a two legged coon dog on a Monday morning.

That boy's as country as a baked bean sandwich!

Always remember, you will go to Hell for lying just as well stealing.

She is pruder than a new sheep on the farm.

It's colder than a polar bears toe nails.

Cooler than a cat covered in puke.

He's almost as smart as people say he thinks he is.

Boy, when you got nuthin' to say, you say it.

It's cold enough to freeze the balls off a brass monkey.

It's cold enough to freeze the brass off a bald monkey.

I locked that thing up tighter than Casey's nuts.

About as sharp as a rat turd on both ends.

Wishing and hoping don't get you any toys on Christmas.

That made me happpy'er than a tornado in a trailer park.

She was so ugly, she could have trick or treated over the telephone.

That boy's momma shoulda hit him in the head and sold the milk!

I'd eat the corn out of her shit.

I'd drink her bath water.

It ain't nothing but a piss ant in the big ant hill of life.

Every day is just a role of the dice, and snake eyes is just a way of life.

I think the cat vomit or the bath water ones are the ones to work into my vocabulary this week.

Holy crap, and I thought I had heard all of the redneck sayings!

I hope your week is great, coffey.

A big ol"HAPPY BIRTHDAY" to the best ol REDNECK I ever come across!