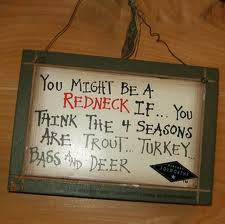 If your aunt had nuts she'd be your uncle.

That’s about as useful as tits on a nun or balls on a priest.

God gave men two heads but only enough blood to run one at a time.

A gallant retreat is better than a bad stand.

That's as hard as pickin’ the fly dung out of pepper.

That SOB has the nerve of a government mule.

I'm hotter than a mess of collard greens on the back burner of a $4 stove.

That's just like wiping your ass with a wagon wheel. There just ain't no end to it.

I'm not going to let this turn into a jack-off contest.

He's lower than a snake's belly in a wagon rut.

That woman learned how to whisper in a saw mill.

I'm going to see to it that it happens, even if it harelips the governor.

I'll have my usual Mexican breakfast--a piss and a cigarette.

That kid ain't through climbing fool's hill yet.

I don't care how they handle it cause I ain't got no dog in this fight.

We'll have to save this argument until later when he's not loaded up on loudmouth soup. (drinking)

After all you've had to drink, that will run through you like a dose of salts.

I've stepped over better than you looking for a place to jack off.

He's as broke as the Ten Commandments.

If God had intended for Texans to ski, he would have made bullshit white.

He wouldn't say "shit" if he had a mouthful of it.

As far as going out with him, I'd rather be in hell with a broken back and colon cancer.

Eisenhower won the election by such a landslide that when he died they were still picking gravel out of his ass.

She's put so many miles on that pussy that it's just hanging open like a pea-coat sleeve.

In those high heels, she looks mighty like a barrel on pegs.

Are those your thighs, or do you have on riding pants?

This is just like fucking a skunk. I've had about all of this good shit I can handle.
Posted by Coffeypot at 12:26 AM

I find this stuff to be about as useful as tits on a nun.

Hahahah I love that one.

This is just like fucking a skunk. I've had about all of this good shit I can handle.

Couldn't have said it any better.
This is one of the best ROFLMA

Oh boy. I do not know how you keep getting this stuff. Do Rednecks ever run out of good sayings? LMAO. Love them!