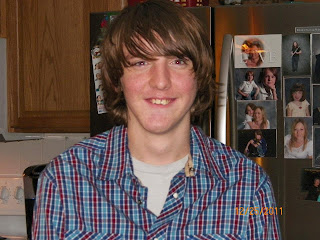 Just last week he was a little baby sleeping on my chest in the recliner. It was last week, wasn’t it? Seems like it.

Anygrowingup, we didn’t know what to get him because he has everything (who needs Santa? He has MeMaw and Paw Paw.) Everything except a car!

Well, it just so happens our old car, a 04 Hyundai Sonata, was in the market for a new owner, so Judy and I introduced them to each other. We did this at his Birthday luncheon a couple of weeks ago. 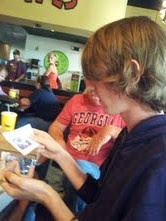 He was given a gift-wrapped box with a picture of the car and the car keys in it..

At first he was a little confused, then the light came on and his face lit up. 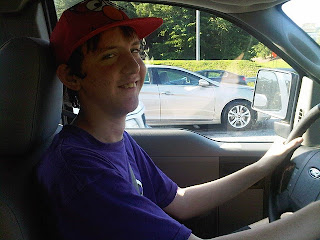 (J-Man driving with me for the fist time. The smile left soon afterward)

He has driven the car for the past year with his learners permit under his parents, Bug's harassing, Judy's and/or my directions…poor guy held up well with my screaming, crying and banging on the dash…uh…grandfatherly directions. And he loves driving the car…even better than driving my truck. But he doesn’t have his driver’s license yet. He had to complete a driving course first.

And he is scheduled to get his driver’s license this Wednesday; then he will be the newest driver on the road. So why am I so apprehensive? He is a great kid…uh…guy and a great driver. But there are other dumb-asses out there. They had better leave my grandson alone. They haven’t ever had a can of grandpa whoop ass poured on them like they will get if they fuck with my boy. 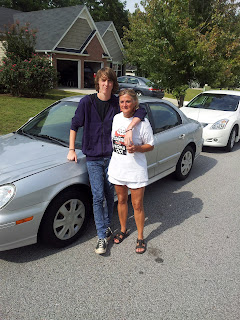 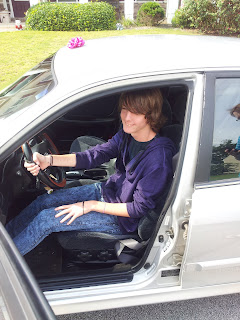 (Does he look kinda happy?) 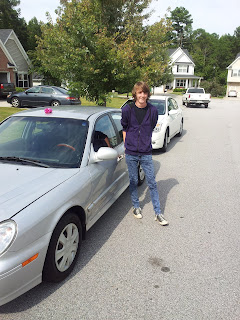 At any rate, we delivered the car to him on Saturday (see the bow).
He was all smiles (that’s our new Nissan Altima behind his car, too.)

And since we were gonna stay for a while and play some board games with them, HE thought it would be a good idea for him and Marni (his mom - my daughter) to go pick up a pizza order instead of having it delivered. See? I told you he was all heart.

Anybirthdaypresent, J-Man is worth it. We are crazy about him and his sister, Bug.

OMG, what are we gonna get her for her 17th birthday (in three years?) Wonder if she would like a Ford F150 picemup truck?

Posted by Coffeypot at 9:46 PM

Best birthday ever, I'd say.

he has a nicer car than I have! sniff. Hey grandpa??? ha ha

Wish I could do so for my almost 17 year old grandson. But I have 10 other grands so I don't think it's gonna happen.

Pam, we needed a new car and that one was paid off, so we gave it to him instead of using it as a trade-in. Don't know what we will do for Bug when the time comes. Wait and see I guess.

You are wonderful Grandparents!

So.... wanna adopt me? I won't need a car but I'm sure I can do with some Major Spoiling :D

your all the best papaw and me maw ever!!!!
I bet now all the ladies will love you :D
Congrats on your grandson b-day and license and car !

You are the nicest grandpa ever.

Much, much love,
Janie Junebug

Look at that! I don’t think J-man has any idea that he is going to receive that precious car for his birthday. This is a good thing as you can definitely see and feel his joy. =) I’m sure his excitement in taking driving lessons to get his driver’s license doubled after having this stunning vehicle.