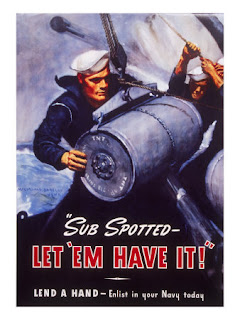 Posted by Coffeypot at 8:15 PM

Until I got to the can of Spam story, I was caught up in the Tracer debacle. Some animals eat their young, but we just send them into war. horrifying fact.

Minor correction - the sub with the malfunctioning toilet was actually U-1206, not U-120.

If you haven't read it already, look up the book "Dirty Little Secrets of World War II" on Amazon. Lots of trivia and stories like the ones you just shared. Unless, of course, that's where you got them from...

Yes, LJ. The young are sacrificed for our freedom and security. Besides, us old men know better and would tell an officer to go fuck himself if they gave out some stupid order.

David, thank you. I will look it up and add it to my library. I got these from an email/Navy shipmate.

David is correct, 1206... And truth IS often stranger than fiction!

Thanks, Old NFO. I've already sent 'No-Neck' Guido over to break the legs of the fucker who sent me the email and left off the '6'. Teach him!!!

My boyfriend is sitting beside me trying to read his National Geographic. I keep interrupting him to tell him one of these facts...and then another...and another.
This was REALLY crazy interesting.

I've watched "The Longest Day" a zillion times and never saw any Koreans....

VV, you have a boyfriend who reads National Geographic when there are war stories to be read? Time for a trade-in?

Ed B. that is because they had them disguised as Chinese.

I remember seeing a made-for-TV movie about Calvin Graham a number of years ago. That kid went through hell (if the movie told his story accurately). Strange but true? Pretty much everything I know is strange but true. Truth is always stranger than fiction.

Love,
Janie, who is back among the living

great post! following you now! I hope to see you in my blog sometimes. thanks!
Kisses from VV!!
www.voguelyvan.com