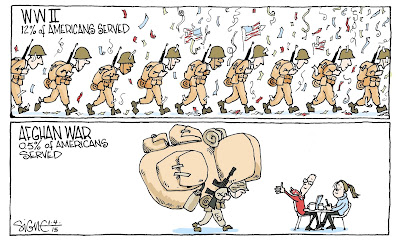 It’s amazing how things have changed in the past 70 years regarding military service.

1945 - NCO's had a typewriter on their desks for doing daily reports.
2016 - Everyone has an internet access computer, and they wonder why no work is getting done.

1945 - We painted pictures of girls on airplanes to remind us of home.
2016 - They put the real thing in the cockpit.

1945 - Your girlfriend was at home praying you would return alive.
2016 - She is in the same trench praying your condom worked.

1945 - If you got drunk off duty your buddies would take you back to the barracks to sleep it off.
2016 - If you get drunk they slap you in rehab and ruin your career.

1945 - Canteens were made of steel, and you could heat coffee or hot chocolate in them.
2016 - Canteens are made of plastic, you can't heat anything in them, and they always taste like plastic.

1945 - Officers were professional soldiers first and they commanded respect.
2016 - Officers are politicians first, and beg not to be given a wedge.

1945 - Medals were awarded to heroes who saved lives at the risk of their own.
2016 - Medals are awarded to people who work at headquarters.

1945 - You ate in a mess hall, which was free, and you could have all the food you wanted.
2016 - You eat in a dining facility, every slice of bread or pad of butter costs, and you better not take too much.

1945 - We defeated powerful countries like Germany and Japan.
2016 - We come up short against Iraq and Afghanistan.

1945 - If you wanted beer and conversation you went to the NCO or Officers' Club.
2016 - The beer will cost you $2.75, membership is forced, and someone is watching how much you drink.

1945 - The Exchange had bargains for soldiers who didn't make much money.
2016 - You can get better and cheaper merchandise at Walmart.

1945 - We called the enemy names like "Krauts" and "Japs" because we didn't like them.
2016 - We call the enemy the "opposing force" or "aggressor" because we don't want to offend them.

1945 - Victory was declared when the enemy was defeated and all his things were broken.
2016 – We haven’t a clue as to what victory is or what it takes to achieve it.

1945 - Wars were planned and run by generals who knew how to fight and win.
2016 - Wars are planned by politicians who haven’t a clue about fighting or winning.

1945 - We were fighting for freedom, and the country was committed to winning.
2016 - We don't know what we're fighting for, and the government is
committed to social programs and political correctness, and our real enemy is global warming.

Take me back to the good old days.

Posted by Coffeypot at 3:16 PM

You forgot the biggie. Can you imagine all the moaning, groaning, crying and saying it goes against their "freedoms" if young men were still DRAFTED and FORCED to defend their country???

It's a tough pill to swallow, but all of that is precisely true. It's not even satirical. I'm glad that I'm out. The bureaucratic stress of not being able to call an enemy Mooselim by an appropriate name (dune coon, rag head, sand n-----, etc) alone is reason enough to find other gainful employment.

LJ, I have been told by troops serving today that they don't want to serve with anyone who didn't volunteer. They didn't want to serve with someone they believe would not serve up to their standards. I say bull shit. I served with draftees and even men who were sentenced to serve instead of jail time. And they were great guys who did their jobs. Some even made it a career. Minds and hearts change as the environment changes. They would serve and fight as hard as the volunteers. They want to stat alive, too.

LL, I got a chuckle out of your nicknames. Not only the inability to call a spade a spade, much of the military experience is enough to turn me off. I served proudly and suffered the day to day bullshit, but I would never tell my mom'ma that treated me badly. I would have suffered more if I had. But I have to say, our guys are fighting with almost nothing and winning - as far as we can go. I think we should bomb them day and night until even the ants are afraid to come above ground.

Truth! Loved this and love that you posted!

+1 on LL. My medically retired son was told not to wear his "brick" because it would make the new potatoes envious. Envious, rather than inspired to emulate?

WSF - I know. It's like wanting to do away with The National Anthem because it is about violence. Tell son to wear them with pride.