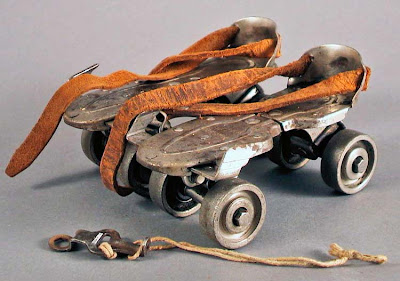 Anyone remember these? Steel wheeled one-size-fits-all roller skates that required a skate key to make them fit.

First of all you have to turn the skates over and loosen the nut in the middle with one end of the skate key. Then you have to adjust the length by sliding the front half back and forth. Once the skate fits your shoe, the nut had to be tighten again.

Then you put your foot (preferably with shoes on - more about that later)in the skate and put the ankle strap on snugly. Then you take the skate key to the side of the skate, up near the front, and tighten the clamps to the soles of the shoe. Then repeat the procedure with the other foot.

Now you are ready to skate on any sidewalk or street that is paved or concrete. They don’t work too well on dirt roads, though some of those hard, red clay roads in the summertime could be skated on, but the rocks makes it a little dicey.

There were three things that were staples for boys at Christmas, a cap gun set of your favorite cowboy, a bicycle and a pair of roller skates. Girls got the bikes with the lowered down cross bars so we couldn’t see their panties when they go off the bikes, their favorite doll, a kitchen set and roller skates. On Christmas morning, if the temperature was above 20 degrees, there were kids skating on the roads like ants on sugar cubes.

The problem was, the clips on the toes of your shoes would rip the soul from the shoes if you hit a bump or sidewalk or someone’s head or stuff, and that would make our moms as happy as a lobster in boiling water - only hotter. My mom would raise holy hell because the shoes were only a month old. Didn’t matter that I was growing out of them anyway. So she did what any frugal mom would do, she got an older pair of shoes and cut the toes out of them. Since the older shoes were smaller, the skate had to be adjusted to fit the smaller size. So I had to skate with my toes hanging over the edge of the skates.

That was difficult to do so I would take the shoes off and tap my bare feet to the skates. I would cut out a piece of cardboard and put it between my feet and the skate and off I would go. Of course the souls of my feet were hard enough to scratch a match on. My dad did it several times to show his friends.

Why were they so hard? From the time school was out for the summer, the only time I wore shoes was to go to church or go down town with mom to pay bills - or to skate. Also, I was raised on a major thoroughfare two lane road. I skated and rode my bike on that road with cars and trucks going by two feet away. And there was no such thing as a helmet. And we never lost a kid in my school to head injuries. But the most fun things was to grab a bumper and ride the bike or skates like the wind. Skates only on the slower cars when the traffic was heave.

So, do you let your kids do things like that?
Posted by Coffeypot at 8:01 PM

sure I tell them to go play on the freeway all the damn time...lol

Hope, we didn't have freeways back then, only roads. And trees, and rivers and pickup baseball and football games. No clubs, no television games, or computers. Just being outside and doing...

Parents are much too paranoid to let their kids have that kind of fun these days.

ahhh, for those days of carefree fun, huh Coffeypot?

Today if kids did that stuff their parents would be up on child neglect charges.

I am at least thankful my kids got to do just a smidgen of it.

Heres to a more care free and fun filled, albeit, gone era.

kys, unfrotuantely parents have to be more paranoid with the number of sickos out there.

RN USA, we did live and grow up in a much safer and simpler time. I'll drink to your toast.

I have to tell you, I am extraordinarily over protective. My son has to wear a helmet, gloves, elbow pads and knee pads.

I had skates like those in the picture when I was a kid, but my son's skates (he's 8) look like ice skates with wheels. I'm pretty sure I'd break something if I tried to use those.

Dacker, I'm not saying that it isn't the thing to do by having the kids of today wear the protective geer. It's just that we didn't because it wasn't there.

I tried the inline skates at the rink one night. If I ever put them on again, I'll be skating using a walker.

I live in BFE (bum- f'ing egypt) and my girls hardly go out (of the house) - but when they do-- I don't worry about them-- they are in the woods somewhere, and my whistle can carry!! And they can whistle back! Or holler.
I love the country. They are free to do and imagine whatever they need to. Clubhouses, castles, whatever--just don't let that snake getcha!! "Tina"

I was #8 and so my mom didn't even bother wrapping my gifts -- she just threw them at me in a brown paper bag.

I remember the skates, because I could hear them klinking before she gave me the bag.

I wore them in the basement (concrete floor)

i had those skates!!!

I do remember those skates. I think most parents are too cautious with their kids. Let them be kids.

Awesome pic... you had these huh? Weren't they discovered with the Dead Sea Scrolls some time back?

Anon - Tina, that is the way I was raised, only not in the country. The part of Atlanta I lived in back then was more rural with plenty of woods. Neighbors still had cows, pig and chickens in their backyards - and outhouses and open wells. I’m talking about the late 40’s through the mid 60’s.

Secretia, eventually we would take the skates completely apart and nail them to the bottom of 2x4’s and make scooters out of them.

Pamela, your mother threw you present at you. Now that’s a woman full of love.

Prissy, it seems more of my peeps had them than I imagined.

Peach Tart, there are many things different from when I grew up (shouldn’t use past-tense…I’m still growing up)

Daffy, yep. I was also the one who invented the phone. I was so excited about my invention. I even called my brother to show him my new invention. Then the phone rang. (blink, blink) I answered and was very despondent. It was a wrong number.

Those old metal wheels were loud as hell too!

I went through a short spell where I would wrap my arms around my legs so I was in a little ball, and would cannonball down a cement-paved hill on my roller skates. It was super fun until one day I lost my balance and roadrashed up the back of my thighs.