A Pussy Kicked My Ass

I have always had a pretty good relationship with pussies of all kind. I’ve enjoyed some when the feelings were not reciprocated and I have had some try to cling to me when I just as soon the would leave. But I have to say that for the most part I have had a very rewarding and satisfactory relationship to both sides…until Sunday night at the Atlanta Airport.

Let me give you a little back story. As I told you yesterday, this dude off’ed himself and left two very cute little pussycats. Somehow a shelter received the cats and was in contact with the dumbass’s relatives in CA. The shelter lady called Dr. Amber to see if she had any ideas on how to get the cats to the family.

In the mean time, Judy and I have plans to go to CA and, thought some cancellations by the airline, we were having to go through LAX (the very same Los Angelis were the family lives) to get to San Diego. So we were asked to take them with us. All we had to do was carry them on as one of a carry-on and give them to the lady meeting us in CA. Easy enoughNo problem!

So the details are worked out with the CA couple, and the airlines was call to find out their requirements and what they would need. The dimensions of the pet carry was give (they would have to be stored under the seat in front of us.) So we arrive at the said airport, check in at the counter and get the proper tags on the cages. We didn’t know how long or what the procedure would be, so we came a few hours early. We set in the waiting area the whole time. Came time to board, they let us board and said crates would not fit under the seat. After heated discussions and shit, we had to deplane and talk to a supervisor. The only solution was to buy …fucking BUY… a soft side pet carrier… for $50. We reluctantly agreed, but the plane left without us.

More hell raising ensued. So she booked us on the next flight. But the ass kicking part came in swapping those little furry pussies for one crate to the other. All the excitement and jostling didn’t set well with them. Soooo…the one I was transferring decided he/she/it didn’t want to go. Thus a struggle of gigantic proportions ensued with me getting the worst of it. Blood running scratches in my hands, arms and leg from some claws that could be used to pick up blocks of like. But the worst thing was…he/she/it bit me on the hand just behind the thumb. He/she/it was latched on for all it’s worth. However, I finally got in the cage.

I was bleeding pretty severely and walked across the hall to the men’s room to wash off the wounds and to stop the bleeding. Funny how people will stop, move over or turn away with Bleeding Man Walking comes by. Funny actually. The dumb ass supervisor offered me a band aid.

Anyscratch, on the flight my hand was getting more sore as the time passed. By the time I got to the motel, my hand was swollen and I couldn’t bend my thumb. Went to the care center today and was put on antibiotics. Cat bites are very infectious. The pictures below were made at the clinic, and the left hand swelled even more to the point were I couldn’t bend my thumb at all. I think the antibiotics are working because the swelling has stopped and I am not hurting like before. I could grip nothing and trying to hold something as small as a slip of paper was enough to bring a grunt. 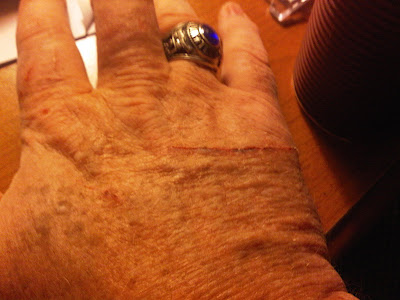 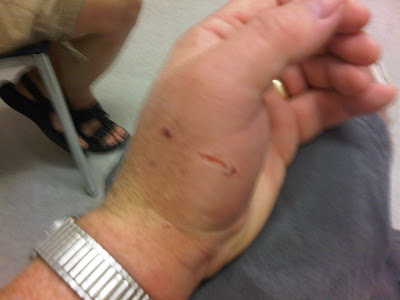 (Left hand with the bite and the swelling)

That pussy whipped my ass. But we did tour Long Beach. Unfortunately the city is so modern now I did see anything to remind me of the early 60’s. The huge Navy base is even gone. No fun for me.

Riding through town I could see in my mind hundreds of sailors in the uniform of the day walking the streets. All the bars are gone now and, well, I’m just glad I am leaving tomorrow.

More later, peeps!
Posted by Coffeypot at 12:15 AM

Glad that the swelling is going down

Okay, I think you also might want to take an antihistamine. I think Zyrtec would be the right one because it also works on hives. It's over the counter.

Holy catscratch Batman! It is a good thing that you are such a good guy...or I could see the need to kick a pussy's a**.

I knew there was a reason I loved you, you are good to kitties.

I hope your vacay gets a LOT better, you certainly deserve it.

I guess I lucked-out with [w]ho-Tat the night of the fire when she was biting and scratching me. None of them swelled up like yours altho there were several that I had bruises from. Alcohol and Aloe seemed to keep me from having to go see a "Doc".

Glad to hear that you are recovering and the Vacation is progressing.

Oh I could have told you the the Navy base in Long Beach would not be what you remembered. Delivered freight[household for military personnel] to the dock-side warehouses for shipment overseas about 35 years ago. Bars and hotel/motels were scarce then too.
Lord knows, we sure did look too. A Long-Hot shower and a good stiff drink of your favorite libation would sure have hit the spot after a day of dragging dirty, greasy tarps, straps, chains and tie-down elastic straps on and off those loads.

Hell, it's probably not what I remember either.

hope you don't get Cat Scratch Fever. That really put my nephew in a bad way for a couple of weeks.

Guys getting whooped by pussy cats is not unusual, though most never admit it happened!

Those scratches and the bite look bad. I'm glad you got some antibiotics.

Glad to know the hand/arm is getting better. Hope your vacation improves also. Thank goodness for easy in & out clinics.

Just like a man, when it comes to pussies, you will never learn your lesson.

Hooray for you, Sir Knight of the Pussy! That sounded pretty bad. Delete that last part. Anyway, be careful, cat bites can get really infected and make you sick. Fast. So watch it close. And don't get cat scratch fever, either.

Well damn "they" were right, NO GOOD DEED GOES UNPUNISHED! I hope you make it back alive! We miss you!

"The Owl and the Pussycat went to sea on a beautiful pea green boat..."
...then she shredded him and the boat sank. Damn pussycat.