The Good, The Bad, The Ugly

I have been infested with a heavy dose of the Good, the Bad and the Ugly lately.  Let me explain.
The GOOD!  My step-son and his wife, Steve and Laura, finally signed the closing papers on their new house.  This is his first home because he has lived in our basement since he was 15 years old.  Now we will be living in his basement.  That is a great thing for Judy and me.  We are looking forward to moving (more on this later.) 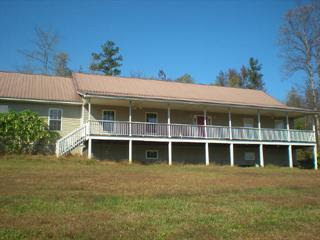 The BAD!  My nephew, David, (no picture) has been in the hospital for a week now.  He was finally, and with the grace of GOD, sent to a rehab center.  However, the incision where all the hardware to rebuild his ankle was placed has become infected.  He has been transported back to Grady Memorial Hell Hole for debridement twice.  This time he has been in there for a week and I am fucking pissed.  He will now be on IV antibiotics for the next six weeks.  I want his ass out of there and moved to Kennestone Welstar Hospital and under a real doctor, not a team of students.  He was supposed to be moved on Saturday, but, as usual, Grady fucked up.
It is partly my fault because I was at the new house working on the basement.  My brother, Stephen, is having issues with his own disease (Parkinson’s) and cannot help as much as he would like.  Plus I have to pick up three puppies tomorrow and take them to Knoxville, TN.  And still help Judy with the new house.
That leads to The UGLY!  For the first time in my life I feel my full sixty six years old.  After close to 25 years of hauling hand trucks of Cokes and kegs of beer, my back is gone.  I cannot bend over.  I cannot invite the world to KISS MY ASS anymore because I cannot bend over to offer the succulent prize.   Plus the heat is killing me.  I cannot take it anymore. And I have no energy.
I’m not sure if it’s my sugar or something else.  But I cannot stand for any length of time and I just do not feel good.  For example, we stopped off at Home Depot today after lunch to pick up some stuff and I told Judy that I could not do it. I went out to the truck and sit till she returned.
But the bright light in my life is Judy.  She is an amazing woman and why she puts up with me is beyond my comprehension.  There is nothing she can’t do.  I tried to help her as much as I could, like lifting heave shit, but I would then have to sit down until the pain subsided enough in my back to let me get up again. 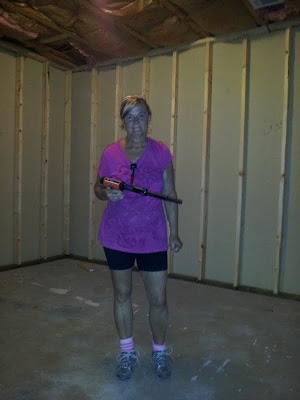 We (she) are studding in the walls and will be hanging boarding soon.
Here is a picture from my cell phone of Judy and some of the studding she is doing. 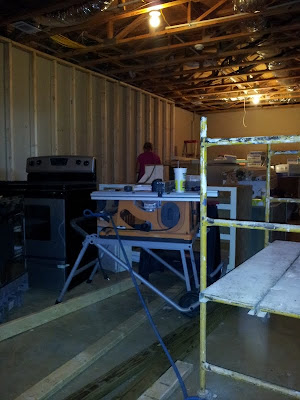 Plus some of the materials we will be using down there.
And she is doing all the stuff I love to do.  She is running the saws, hammering with the air-hammers and handheld ones, too.  She is having all the fun while I just wimp out.
I have to admit, it has me pretty depressed.  I try to fight it, peeps.  I keep cracking jokes that keep Judy laughing, but I feel as useless as a spayed dog in a breeding session at Mike Vick's house.  I’m feeling the mortality very much.
My winter years are finally here and it’s a fucking blizzard.
Posted by Coffeypot at 12:41 AM

Oh come now, man up! This is just a blip in the radar, you are not ready, not even close to being put out to pasture, so stop feeling sorry for yourself, enjoy watching your wife (who is so lovely by the way) do some manly work, AND get your thyroid checked! I swear John, I have known so many people feel like you do, and turns out, it's a simple issue solved with hormone therapy. Go get your thyroid checked! Promise? You promise? I'll keep nagging until you do, you know I will! In the meantime, cut yourself some slack. You have a lot going on with your son moving out and your nephew's surgery. Don't be so hard on yourself. Maybe this is your body's way of taking a break because you won't fucking let it! How's that for nursing compassion.

Once the weather gets cooler, and once your level of stress begin to ease off (stress from the moving, the renovations, David, all the other stuff you have committed yourself to doing)then you will probably find that your back issues start to calm back down again too (remember that taking a break isn't the same as giving up)

Are there other tasks you can be doing whilst your back is playing up? Wrangling with the state tax group on the phone / arguing with the local power or phone group? - all these things take time and effort and can be done from a chair

When was the last time you had a complete physical? See your Doc and ask about a physical therapist - there may be some exercises to strengthen your back muscles without causing strain. And if you have diabetes, get it under control!

Winter, my ass! You're not old, you're just old enough to require maintenance. Welcome to the club, I'm 47.

sorry about your nephew.. id roll some heads to get hi outta there :(

and you mr.. your still a young pup.. i blame it on the hurricanes !
many hugs!

Funny that you never mentioned Judy was a Smurf!!

Judy IS the best thing you could have and why she puts up with you is a mystery to all of us....unless you're not just handsome, but rich as well.

You have too much on your plate and something had to give. Of course it was your back. Grady hospital sounds like heaven to us, given the fact there are no doctors in our area.

Joe had brain scans scheduled today to find out why he's falling straight back onto the ground. Suddenly, *PLOP* and he's flat. Well, the tests got cancelled today. Our insurance didn't think it was necessary.

Body parts are giving out and it's never like a television show where the doctors suddenly have the answers and all is healed.

I feel sad when I realize I will never be able to do woodworking again, or even build something as simple as a gate or a step. Judy is living her salad days. Tell her to enjoy it while she can.

I told you eating all the fucking Waffle House wasn't good for you! Now you done and got Old all of a sudden.

You better suck it up! That Judy is one hot lady and she's going to trade you in for a couple of 30 years olds... or younger.

Came by via Dana...I will come back! Til then, get rot feeling better, will ya? Because when you're through there, I've got some stuff I need done por la Casa de Crazy...

Coffey, old???? Nahhhh. You just need to run some vinegar through the pipes and you'll be good as new. Even coffeymakers need a good cleaning out now and then - to make sure that it's good, fresh java brewing! I'm with Sandra and Suz - get your ass to your doctor and get a damned check up, you hornery, bull-headed bastard! MLYLT!!

Well you got lots of advice here, hope you follow up on some of it. You men are a stubborn bred. Good thing women have the babies! I live with a 79year old hubby,(much, much older than me) (what was I thinking 30 years ago?) I digress, sorry. He thinks he has to hide to take a catnap, doesn't know that I know. Geech!!

Thank you all for your comments and suggestions. When I get settled into our new location I will find a new doctor. But till then, I am just tired and stressed. Perhaps I need to get laid...any takers...oh yeah...Judy. Okay!

That Janie Girl, thanks for stopping by. Any friend of Dana's is welcome here.