Seems I'm Back - For Now

Ain’t been around much, peeps.  On Monday I delivered some pups to one of my old New York rescue ladies who moved down outside Knoxville, TN.  It was an easy drive, only about three hours.   But the highlight was meeting one of my blogging and Facebook peeps, Tonya, over at blueeyedtwani on my bog roll over there on the left.  We had a few cups of coffee at the local Waffle House (only the best for my ladies.)  I am having trouble copying the picture she put on my FB page, so go us at http://www.facebook.com/photo.php?fbid=10150782465050475&set=t.1580688209&type=1&theater. 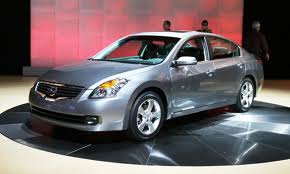 Then on Tuesday I drove my brother, Stephen, to Birmingham to pick up a new car.  He bought a new Nissan Altima (not his car above.) That was a two hour drive that was quiet enjoyable and I got to drive the new car.  That is a sweet driving machine.
That brings me up to today.  After raising a little hell and making 4,767,852 ½  phone calls, I got David out of Grady Hospital and he will never go back there again.  He is now in the care of a Podiatrist close to his rehab center.  A great doctor with a great repartition.    And he says David is curable.  His infection will be brought under control but his rehab in walking will be a little longer. 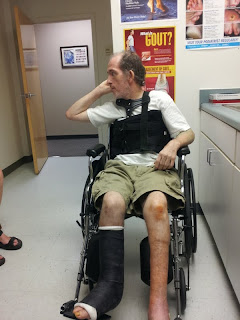 Here is David trying to hear what Stephen is saying. 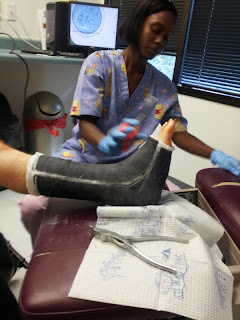 One of the problems from Grady is they put his leg in a full cast with no way to treat the infection.  These are doctors for Christ sake.  Well, this doctor had his cast cut in two.

Here he is with the half cast. 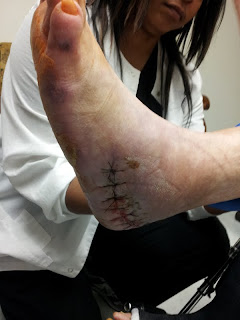 And here is his wound.  See how swollen he is.  (okay, open your eyes you weenies. It’s not hurting you.)  It is much better looking than the last time I saw it.  Then he was leaking...uh...stuff as they took off the patch.
Anyway, the has a new silver coated wrapping and the two halves of the cast put back on wrapped in an Ace Bandage.  This way the nurses at the rehab center will be able to get to the wound and treat it.  Though David will be on an IV antibiotic treatment for the next six weeks, he will be much better off.  That and he has been getting a shot in his belly before each meal to keep down blood clots.  Since there is no more surgery panned, he can now go on Coumadin to thin the blood and save clots from forming.
And best of all, I haven’t had to work on the house.  But that will change tomorrow. Dammit!
Posted by Coffeypot at 10:16 PM

I'm glad things are beginning to look up! Good luck with continued recovery for David!

thought you might enjoy this....The car in front of me had a bumper sticker on it.
It read: “Pray for Obama. Psalm 109:8.”
When I got home I opened my bible to the scripture and read it and started laughing.
Psalm 109:8 –“Let his days be few and brief; And let others step forward to replace him.”
At last –I can voice a Biblical prayer for our president!
Let us bow our heads and pray.
I did....
September Girl

bad doc's? I know I had one onetime..... he wanted to operate and I asked for a second opinion.

I had a wonderful time with you too! Have to do it again :)

Such an ordeal it has been. Ouch.
Curable is a good word though. You're his hero, I'm sure.

Glad to see you back - missed you!

And excellent news about David. See!! only you (with your calm and rational telephone manner - heh!) could have achieved moving him from that bad hospital.

Keep up the good work!

Glad you're back, and I'm glad David's in better hands. Now, DON'T OVERDO IT!

Maxwell, thanks, man! I appreciate it.

September Girl, I have been having that prayer for over two years now.

CI Dude, how would he know? You have that black line across your face…maybe that’s why he said you are ugly.

Wrexi, I’m no hero babe. Just an uncle who is anxious to get him healed so I can break every bone in his body for pulling this stunt.

Pax, not so much calm telephone manner…I think I have a telephone restraining order with them now.

Suz, today is an off day for me. I’m just chilling and working with television and news media in Iowa concerning our upcoming Navy reunion in Waterloo. Chilling so much I haven’t eaten yet. Better head out to the Waffle House.