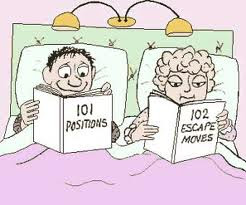 THINGY (thing-ee) n.
Female - Any part under a car's hood.
Male - The strap fastener on a woman's bra.
VULNERABLE (vul-ne-ra-bel) adj.
Female - Fully opening up one's self emotionally to another.
Male - Playing football without a cup.

COMMUNICATION (ko-myoo-ni-kay-shon) n .
Female - The open sharing of thoughts and feelings with one's partner.
Male - Leaving a note before taking off on a fishing trip with the boys.

COMMITMENT (ko- mit-ment) n.
Female - A desire to get married and raise a family.
Male - Trying not to hit on other women while out with this one.

ENTERTAINMENT (en-ter-tayn-ment) n.
Female - A good movie, concert, play or book.
Male - Anything that can be done while drinking beer.

MAKING LOVE (may-king luv) n.
Female - The greatest expression of intimacy a couple can achieve.
Male - Call it whatever you want, just as long as we do it.

REMOTE CONTROL (ri-moht kon-trohl) n.
Female - A device for changing from one TV channel to another.
Male - A device for scanning through all 375 channels every 5 minutes.
AND
He said, “I don't know why you wear a bra; you've got nothing to put in it.”
She said, “You wear pants don't you?”

He said, “Shall we try swapping positions tonight?”
She said, “That's a good idea; you stand by the ironing board while I sit on the sofa and fart!”

He said, “What have you been doing with all the grocery money I gave you?”
She said, “Turn sideways and look in the mirror!”

He said, “How many men does it take to change a roll of toilet paper?”
She said, “We don't know; it has never happened.” 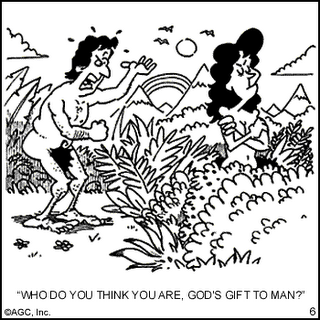 Love the definitions!
Happy Thursday!
~AM

That explains a lot about the inner thinkings of man.