ADVICE FROM A RETIRED HUSBAND 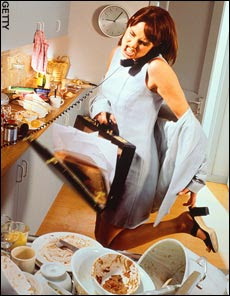 It is important for men to remember that, as women grow older, it becomes harder for them to maintain the same quality of housekeeping as when they were younger.  When you notice this, try not to yell at them.  Some are oversensitive, and there's nothing worse than an oversensitive woman.

My name is John.  Let me relate how I handled the situation with my wife.  When I retired a few years ago, it became necessary for Judy to get a full-time job, along with her part-time job, both for extra income and for the health benefits that we needed.  Shortly after she started working, I noticed she was beginning to show her age.  I usually get home from the golf club about the same time she gets home from work.

Although she knows how hungry I am, she almost always says she has to rest for half an hour or so before she starts dinner.  I don't yell at her.  Instead, I tell her to take her time and just wake me when she gets dinner on the table.  I generally have lunch in the Men's Grill at the club, so eating out is not reasonable.  I'm ready for some home-cooked grub when I hit that door.  She used to do the dishes as soon as we finished eating.  But now it's not unusual for them to sit on the table for several hours after dinner.

I do what I can by diplomatically reminding her several times each evening that they won't clean themselves.  I know she really appreciates this, as it does seem to motivate her to get them done before she goes to bed.

Another symptom of aging is complaining, I think.  For example, she will say that it is difficult for her to find time to pay the monthly bills during her lunch hour.  But, Boys, we take'em for better or worse, so I just smile and offer encouragement.  I tell her to stretch it out over two, or even three days.  That way, she won't have to rush so much.  I also remind her that missing lunch completely now and then wouldn't hurt her any (if you know what I mean).  I like to think tact is one of my strong points.

When doing simple jobs, she seems to think she needs more rest periods.  She had to take a break when she was only half-finished mowing the yard.  I try not to make a scene.  I'm a fair man.  I tell her to fix herself a nice, big, cold glass of freshly squeezed lemonade and just sit for a while.  And, as long as she is making one for herself, she may as well make one for me, too.

I know that I probably look like a saint in the way I support Judy.  I'm not saying that showing this much consideration is easy, either.  Many men will find it difficult.  Some will find it impossible!  Nobody knows better than I do how frustrating women get as they get older.  However, dudes, even if you just use a little more tact and less criticism of your aging wife because of this article, I will consider that writing it was well worthwhile.  After all, we are put on this earth to help each other.


EDITOR'S NOTE:  John is in the hospital in serious condition.  His wife, Judy, was arrested and charged with attempted murder for beating him with a broken broom handle.  The all-woman jury took only 10 minutes to find her Not Guilty.
Posted by Coffeypot at 4:55 PM

Judy is not only exhausted, but fails on the "competency" level. Every woman knows that if he's still breathing, the job wasn't done correctly.

So did they spend the first 9 minutes wondering why she didn't use a nine-iron instead of a broom handle? That's the only explanation I have for wasting that much time.

Before I saw the editor's note, I was wondering if this was published posthumously.

Attempt to murder. Old Man,you're lucky I ain't your old tired wife, or I'd a shot you with your own shot gun! LOL!

Guess it was attempted murder because she was so exhausted.... You are a keeper my friend!

That just cracks me up. Better watch out Coffey, if you get all of us broads po'd, you'd be in a heap of trouble. We're such a sensitive type, dontcha know?

1. Never Ever tell a woman that she is getting old and tired.