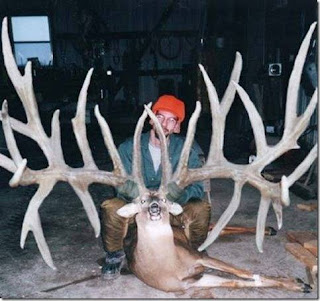 Above is a picture of the new world record whitetail buck.

It was taken by the cousin of a co-worker’s sister’s uncle’s best friend’s son-in-law’s niece’s hairdresser’s neighbor’s ex-boyfriend’s oldest nephew.  Reportedly it will score 2603 1/8 by B&C standard and was shot in West Texas on a really windy day, 85 degrees downhill, around a curve at 900 yards with a .22 cal. rifle.

Supposedly, this deer had killed a Brahma Bull, two Land Rovers, and six Jehovah’s Witnesses in the last two weeks alone.  They said it was winning a fight with Bigfoot when it was shot.  And it has also been confirmed that the buck had been seen drinking discharge water from a nuclear power plant.

All this has been checked and confirmed by Snopes, so it has to be true.  Honest!

Posted by Coffeypot at 9:46 AM

Wait a minute. I'm confused that can't possibly be real, can it? (This coming from the gal that believed her mother had eyes in the back of until she was fourteen)

*In back of her head*... sorry I got distracted when I started thinking about the feeling of complete violation when I actually searched through her hair in the back of her head and found nothing. That was when I was twelve. She fooled me for another two years after that when she told me they were invisible too. (I can't wait until she goes senile - then it's payback time!)

LD, my mom tried that with me. But I knew she was bullshitting because I stood behind her and shot her a bird and she didn't even know I was there.