The day when we take the time to honor those who Gave Their All while serving in the United States Armed Forces from all wars.  It is not a time to thank a veteran for his service… tough we should do that every day.  We have Armed Forces Day and Veterans Day for that.  It is, however, totally proper to thank a family who gave a son, brother, dad, mom, sister or kin in the defense of our great nation - even if they were not in combat.  They put on the uniform, had the boots on the ground, flew in the air, bobbed on the sea, and lived the life uncommon to civilians.  But they did not come home to loving arms.  Or come home at all.

I will be thinking of a special group of men who died on 3 June, 1969, at a little after 3:00 a.m. when their ship, the USS Frank E Evans DD754, was cut in half by an Australian Aircraft Carrier. 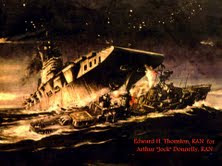 Nothing intentional!  It was just a combination of errors with only a few minutes to realize and adjust. 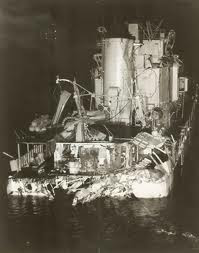 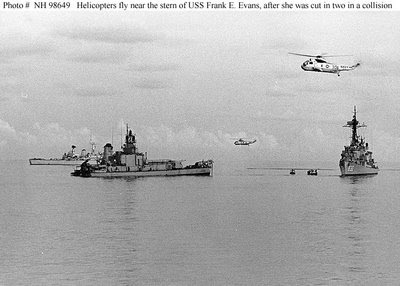 Seventy four men died that night with only one body recovered.  Young men, all!  Three brothers from Nebraska were part of the 74.  A father survived only to find out his son did not.  And I had a good friend from my deployment who did not make it.

There are many stories of bravery and sadness that night.  Many men from the HMAS Melbourne, the carrier involved, tried hard to find our survivors, treated them medically, fed them and gave them a few beers, and donated their own clothes as many or our guys were sleeping and had to get out of their berthing compartments in just jeans or their skivvies.

Just a few days before the accident they were on the gun line providing fire support, day and night, and nightly illumination for a group of Marines.  They were combat veterans… many only 17 and 18 year olds who had only been on board for 17 days.  They were fresh out of boot camp and learning shipboard life while working to save Marine’s lives.

Before leaving CONUS, they had orders to leave on a certain date and join a group of international ships (New Zealand, Australian, etc.) in training for working together during war time.  Had the accident not happen, in a few days they would have gone to some locator (Philippines, Taiwan, etc.) to rearm and resupply, and then head back to the gun line.

But because they were 50 miles outside the designated war zone, the powers that be will not allow their names to be on the Vietnam Memorial.  A travesty and a slap in the face to the families of the lost 74.  But politics and cover your ass works well in D.C.

This past month I have been posting story boards of each of the guys on the ship’s Facebook page and, in do so, I have thought about them and their life and what could have been… and it hurts.

I only knew one of them personally, but I knew them all by experience.  Seaboard life is the same everywhere.  I know their activities, their schedules, and their boredom.  I know the excitement of providing fire support.  I know the procedures of being ordered to plane guard.  I know how they would run up and down those latters like monkeys and walk down passage ways with a rocking and rolling ship under their feet.

But they were bravely serving our country.

This video (that I cannot make work) says a lot.

Too many of our people died while in the service of our country without hearing a shot in anger. They are just as dead, and their service just as important. We need to remember them, too. Their loved ones haven't forgotten.

Thank you for writing this, Coffey.

Nice tribute, Coffey. Thank you for sharing this. Hugs and love sent your way.

OldNFO, you have many more years of Naval service than I ever though about. So thank you, Sir, for all you did... even if you were an officer. :)

JJ and MF, you are welcome. They are on my mind a lot.